How would you react?

How would you react?  John 7.10-13 John #33
Listen to this podcast:  https://www.pastorwoman.net/podcast/episode/23a39ca5/how-would-you-...
You would be hard-pressed to find someone who does not have an opinion about Jesus Christ; however, I've noticed many people today do not know very much about Jesus.  Most have done little investigation of their own.  They have heard he was born in Bethlehem and put in a manger, because they hear songs about that.
They might know he was said to have died on the cross, though they are not sure ‘why’;
and they know that Easter is supposed to be about him rising from the dead, (but ‘intelligent people know that could never have happened', they say!)
On those scant details, plus information the media distributes about acting-out or misbehaving Christians,
and any personal dealings with ‘religious’ people,
folks form their opinions about Jesus.  As my sons would say, ‘that is messed up’.  And it is.
If someone wants to know about Jesus, he should read the personal accounts about him in the Scriptures . . . and then have courage enough to say, ‘if you are real, please show me.’  After all, who else walked around planet earth 2000 years ago that remains as famous as Jesus?  No one. And what person can carefully read with an open mind about the life of Jesus and remain unaffected by him?  One simply must take a close look at Jesus and make up his own mind! Fact is, any close look at Jesus Christ will elicit a reaction--especially when examining the historical evidence for Jesus.
Jesus in Jerusalem during Sukkot - (the Festival of Shelters or Booths or Tabernacles)
“Later, after his brothers had gone up to the festival, he went up himself, not openly but as though he did not want to be seen. Consequently, the Jews kept looking for him at the festival and asking “Where is that man?” And there was an undercurrent of discussion about him among the crowds. Some would say, “He is a good man”, others maintained that he was not, but that he was “misleading the people”. Nobody, however, spoke openly about him for fear of the Jews.” 1
Ripples of reactions to Jesus were present within the throngs of pilgrims, even as they looked for him, sure that he must be among the people.  The religious people hated him and were already planning to kill him.  Jesus interfered with their ways of doing things and he called them on their impure motives and hypocrisy. Generally speaking, the Pharisees hated him because he dismantled their religious piety and legalism, in favor of a higher standard. Rather than teaching 613 points of religious law, Jesus said that two commandments were most important—1) love the Lord thy God with all thy heart, soul, mind and strength, and 2) love thy neighbor as thyself2.  The very political Sadducees hated him because he threatened their comfortable positions as most of them were the priests in the synagogues and enjoyed prestige in their communities.
Some reacted with a kind of prideful disdain because Jesus had no rabbinic credential . . . how could he teach them anything, much less require anything of them, when he was not well educated or culturally refined?  (can anything good come out of Nazareth?) 3
And then some in the crowd looked at Jesus with keen interest.  First, for them he became a focal point, then a discussion and perhaps a debate.  Some of these, in fact, deduced that
he was not just a good man,
but a righteous man,
and could only be the Son of God,
and they followed him.
I hope that is you, but if you are unsure about him, then at least investigate Jesus and his claims for yourself.  Give it all you’ve got, kinda like your life depends on it—because it does. In September, I will start a teaching series on More than a Carpenter4, which pairs magnificently with this gospel of John. 'Grab a copy and join me?
Christine
PastorWoman.com
1 - John 7.10-13, Phillips
2 - Mark 12.30-31
3 - John 1.46
4 - More than a Carpenter, Josh McDowell and Sean McDowell 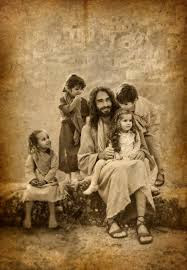