A Question that just may haunt you

Who do you say that I am? John 7.10-53~John #34 http://www.biblegateway.com/passage/?search=John%207.10-53&vers...
Listen to this podcast:  https://www.pastorwoman.net/podcast/episode/23db8aa7/a-question-tha...
I remember watching Euro Soccer Finals (Spain v. Italy) with my soccer-fixated sons . . . dang, but I miss those days!  There was one camera view from way above the field that allowed the television viewer to see most of the players--where they were positioned on the field, ready to move into position and move the ball down the field.  We are going to do a similar thing today viewing from above the various positions people were taking about Jesus at the Feast of Tabernacles in Jerusalem, and why their personal conclusions were critical. Why such careful inspection? you ask.
~>your verdict about Jesus matters more than anything else in life.
John writes, “After His brothers had gone up to the festival, then He also went up, not openly but secretly. The Jews were looking for Him at the festival and saying, “Where is He?” And there was a lot of discussion about Him among the crowds. Some were saying, “He’s a good man.” Others were saying, “No, on the contrary, He’s deceiving the people.” Still, nobody was talking publicly about Him because they feared the Jews.”  John 7.10-13
Our cameras are well above the dusty streets of Jerusalem where we see the tents of the Jewish pilgrims gathered to commemorate their tent-dwelling times in the wilderness 40 long years before entering the Promised Land.  But this year in Jerusalem, there is much talk about one Jesus of Nazareth.  Many are making up their minds where they stand with the man who claims to be the Son of God.  Indeed, the verdicts are coming in—and even in first century Palestine, under Rome's heavy hand while awaiting the messiah, many simply say “he’s a good man.”
Yes, they took Jesus as a ‘good man’, but others believe different things about Jesus—some that he is a prophet, still others that he is a mad man, maybe even demon-possessed!  Some think his teaching is absolutely dynamic, and they could sit and listen for hours.  They see his courage, knowing the Jewish leaders want to kill him, but here is Jesus, teaching in public just the same.  (It would only be about seven months later they would put Jesus through a sham of a trial and crucify him the next day.)
As they questioned him, wondering where he had gotten his training, (Jn 7.15), Jesus replied, “My teaching isn’t Mine but is from the One who sent Me…” and then, “You know Me and you know where I am from. Yet I have not come on My own, but the One who sent Me is true. You don’t know Him; I know Him because I am from Him, and He sent Me.” (V 28-29)  Jesus again makes it clear that his teaching came from God, and that indeed, he was sent by God.  If folks hadn’t taken up a position before, Jesus forced their hand …  So, all those who heard were forced to make up their minds -- what would they do with Jesus who claimed he came directly from God?
‘But,’ they reasoned among themselves, he can’t be the Messiah!  “…we know where this man is from. When the Messiah comes, nobody will know where He is from.” V. 27  For the Jewish belief of the day was that the Messiah would burst on the scene rather mysteriously; not so with Jesus, they knew he came from Nazareth.  Still they observe Jesus saying such things, making such claims in the Temple and the authorities do not seize him … (hmmm, what to do with Jesus)
At some point, the question is before all of us—the one Jesus asked, “Who do you say that I am?”
Remember, your answer will impact your eternity.
If you only knew, your answer affects every day living.
We can agree that Jesus was a good man, but that is not enough—as Jesus was good, but he was so much more than that.  Most would concur he was a masterful teacher; any astute observer would deduce such a thing, but again, the description stops short.
If Jesus turned and looked at you and asked you that question,
“Who do you say that I am?”  What would you say?
I would say, ‘you are Jesus, Son of God, my Lord, and my Savior.’
Any other answer would just be incomplete, wouldn’t it?
Has it ever mattered more than now? I think not.
Christine
PastorWoman.com 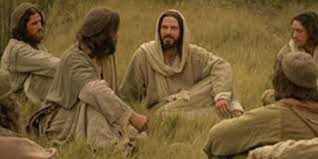