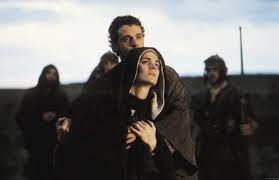 Listen to this podcast here:  https://www.pastorwoman.net/podcast/episode/4af04cf8/feel-the-love-...
“When Jesus saw his mother there, and the disciple whom he loved standing nearby, he said to his mother, “Dear woman, here is your son,” and to the disciple, “Here is your mother.” From that time on, this disciple took her into his home.”
Do you feel it?  Love is in the air, even as our Lord is in physical agony on the cross … his body weight begins to sag, pulling even more greatly on the nails in his wrists, sending fiery shooting pains up his arms, while his pectoral muscles scream, his shoulders ache, his lungs cry for air, and as he pushes up on his nailed feet to gasp for air, the pain is more than immense… it's Jesus loving you and me…
Thankfully, Jesus is not alone. Around the foot of the cross are several who love him, several who are devoted to him.  The air is heavy with emotion, his and theirs.  Along with the beloved disciple, John, there are four women:  Mary, the mother of Jesus, another Mary, Mary Magdalene, and Salome, the sister of Mary.  Have you ever noticed women so present at the cross?  Women were first to the tomb on the morning Jesus rose from the grave as well!  Hmmm… what is the significance of the Bible making mention of such?
Could it be that God loves women?  Oh yes, I believe so!  While women were second-class citizens in the culture of that day, (at best), they were not inferior at all with God.  First, notice that while Jesus is dying on the cross, he ‘remembers’ Mary to John, asking him to care for his mother.  Jesus connects his two loved ones, makes provision for his dear mother, and forms a new community in these two short phrases.  Now we know Jesus had other siblings, (half-siblings, of course!), so one might ask why Jesus would ask John to care for his mother, and not them.1   Actually, where were they, while their brother was dying??  Remember, they did not believe in him … yet…2 not until after the resurrection.
John has noted twice in his gospel that Jesus only did what his father gave him to do; he acted in accordance with the heart and will of the Father.  Friends, Jesus demonstrated his high regard for women throughout his ministry.  Jesus was unaffected by social mores—actually, he violated them in every single encounter he had with women recorded in the gospels.3   Why Jesus was a revolutionary with regard to his treatment of women!  You must be aware that in the first century, at every synagogue service, Jewish men prayed, “Blessed art thou, O Lord, who has not made me a woman.”  Women sat in a separate section, were not counted in quorums, and were rarely taught the Torah.  In social life, few women were permitted to talk to men outside of their families, and a woman was to have no close contact with any man but her spouse.1  ‘And for rabbis?  They were forbidden to speak to women in public.  So Jesus was a most unique rabbi!
Yes, the very fact that women were mentioned by name at the cross of Jesus is significant; yes, the fact that Jesus commended Mary to the care of John is remarkable, all the while our Lord suffered as he did on our behalves… because it helps us feel his great love.  Love is in the air … do you feel it?
By some, God's great love would seem reckless. A song: Reckless Love, Israel Houghton http://www.youtube.com/watch?v=Zi1O8_MHRf0
Jesus Christ ~ not another like him.
Christine
PastorWoman.com
1 Matthew 12.46
2John 7.5
3Philip Yancey, The Jesus I Never Knew