Jesus has a question for you

Do you want to get well?  John #16 John 5.1-19
Listen to the podcast:  https://www.pastorwoman.net/podcast/episode/2fb22b5e/jesus-has-a-qu...
Do you want to get well? That was the question Jesus asked a paralyzed man lying near a healing place a long time ago.  I wonder if the guy had an incredulous look on his face … of course I want to get well--look where I am!  In the 21st century, I look around, I listen and I wonder sometimes about folks, do they want to get well?
Check it out:
John writes, “Afterward-- [After what?  After Jesus’ healing the son of Herod’s man, without even seeing the boy, resulting in the government official’s entire household coming to know Him]-- Jesus returned to Jerusalem for one of the Jewish holy days. Inside the city, near the Sheep Gate, was the pool of Bethesda, with five covered porches. Crowds of sick people—blind, lame, or paralyzed—lay on the porches. One of the men lying there had been sick for thirty-eight years. When Jesus saw him and knew he had been ill for a long time, he asked him, “Would you like to get well?”
“I can’t, sir,” the sick man said, “for I have no one to put me into the pool when the water bubbles up. Someone else always gets there ahead of me.”
Jesus told him, “Stand up, pick up your mat, and walk!”
Instantly, the man was healed! He rolled up his sleeping mat and began walking! But this miracle happened on the Sabbath, so the Jewish leaders objected. They said to the man who was cured, “You can’t work on the Sabbath! The law doesn’t allow you to carry that sleeping mat!”
But he replied, “The man who healed me told me, ‘Pick up your mat and walk.’”
“Who said such a thing as that?” they demanded.
The man didn’t know, for Jesus had disappeared into the crowd. But afterward Jesus found him in the Temple and told him, “Now you are well; so stop sinning, or something even worse may happen to you.” Then the man went and told the Jewish leaders that it was Jesus who had healed him.
So the Jewish leaders began harassing Jesus for breaking the Sabbath rules. But Jesus replied, “My Father is always working, and so am I.” So the Jewish leaders tried all the harder to find a way to kill him. For he not only broke the Sabbath, he called God his Father, thereby making himself equal with God.
So Jesus explained, “I tell you the truth, the Son can do nothing by himself. He does only what he sees the Father doing.  Whatever the Father does, the Son also does.”  John 5.1-19, NLT
On this day in Jerusalem, the lame man woke up and thought it was going to be just like every other day—if the stream bubbled up water at the Bethesda Pool—he would struggle and strain to get to it, but like every other day for more days than he could count, others would rush before him.  There just was not much hope for change; but if he left the pool, there was no hope at all.
Then Jesus.  Of course he did not know Jesus when He addressed him and said, “Would you like to get well?”  That really is the question, isn’t it?  Hmmm—people take pills, run to doctors, try fads, but do they really want to get well?  Sometimes, getting well takes work.  Getting well takes realizing what has made us sick — things like stress, bitterness, guilt, unforgiveness, even unrealized dreams that have made us sick at heart. . . then there are bad habits, unhealthy relationships and not seeking God’s healing for our souls.  Truth is, God wants so much more for us than we even want for ourselves.
Jesus spoke healing into being – ‘Take up your mat and walk!’ Turns out there is hope for change after all.
Jesus changed everything.  He still does.
Christine
PastorWoman.com 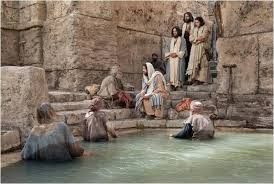