Who's in charge of your life?

Who is in charge of your life? 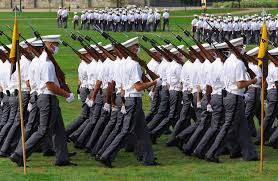 Listen to this podcast here:  https://www.pastorwoman.net/podcast/episode/1d7750de/who-is-in-char...
My young neighbor Joe heads back to West Point for his sophomore "yearling" year, playing baseball and being trained in all things military besides his college coursework. Picture in your mind’s eye the scenes of young cadets, spiffy and shiny, called to attention, ready for inspection, and then to “maa-rch . . . right, left, forward, halt!”  Sound off . . . and march again.  Why do the cadets respond as they do?  Because their cadence has been called.  No doubt who is in charge at this point.
Who calls your cadence?  Surely there is some reason you do what you do, right? Do you allow your cadence to be called by the culture around you—desires for pleasure, ambition or something else that is fleeting?  Is it the world’s priorities that pressure you, trying to squeeze you into its mold?  Hmmm . . . Or have you given yourself to something far greater, something that will last, like following Christ?
In the apostle Paul's letters he makes the case over and over that we either choose to live for self or we give ourselves over to God, allowing his higher ways to dominate our thinking and behavior.  In essence, either we call our own cadence, (sometimes just by default, because we do not order much of anything in our lives!), or we ‘fall in’ and let God call our cadence. We recognize that he is God, worthy of our trust, and we make it our goal to honor him with our lives--a higher road.
As we turn our gaze to Ephesians chapter three, we recall that Paul introduced himself as "Paul, the prisoner of Jesus Christ". Once Paul got an upclose and personal picture of Jesus, whether he was in prison or free, he went all out to tell others about him; everything he did surrounded living a life that honored Christ. The truth of Jesus' life and mission radically changed Paul - in short,
he knew and believed that Jesus--
-was born in Bethlehem, raised in Nazareth
-was baptized by John the Baptist in the Jordan River
-taught around the Sea of Galilee, with headquarters in Capernaum
-performed signs and wonders, taught of the kingdom of Heaven
-raised up the first Motley Crue/Crew: twelve who had hands-on training
-said he was going to die, but on the third day, rise again … and DID!
-spent 40 more days with them, doing life
-ascended into Heaven from atop the Mt. of Olives, as they watched
-sent the Holy Spirit ten days later – again, as he said he would.
Paul knew how different his life was before he had relationship with Jesus; why, it was night and day! He said "To the weak I became weak, that I might win the weak. I have become all things to all people, that by all means I might save some."1 And like the other apostles of Jesus Christ, Paul was willing to die for Jesus - and eventually did in Rome.
'For this reason', he wrote about how the gospel message came first to the Jewish people, but that he, Paul - (we know that he was a highly educated Jewish rabbi) - was then commissioned to take the message of love and freedom to non-Jews,
Gentiles.2
Someday I will meet Paul, have a cup of Italian Roast3 with him, but until then I just gotta say, 'Paul, you had it right. You let Jesus Christ call your cadence and inform how you made your decisions... how you chose to live each day - not the Jewish religious leaders, not the Roman government, not even your own physical comfort--only Jesus. Once you were confronted with the claims and proofs of the Messiah Jesus, you were sold out because of your great love for him. Sign me up.
How about you, my friend? Ready to go bold in your Christian faith? O, I pray so.
She figured it out: "For All My Life", Taya: http://www.youtube.com/watch?v=6J5cAy7w9Dk
Think about who or what drives you~
Christine
PastorWoman.net
1 - 1 Corinthians 9.22
2 - Ephesians 3.1-13: https://www.biblegateway.com/passage/?search=Ephesians+3%3A1-13&amp...
3 - Peet's Italian Roast coffee - my first spiritual experience of the day