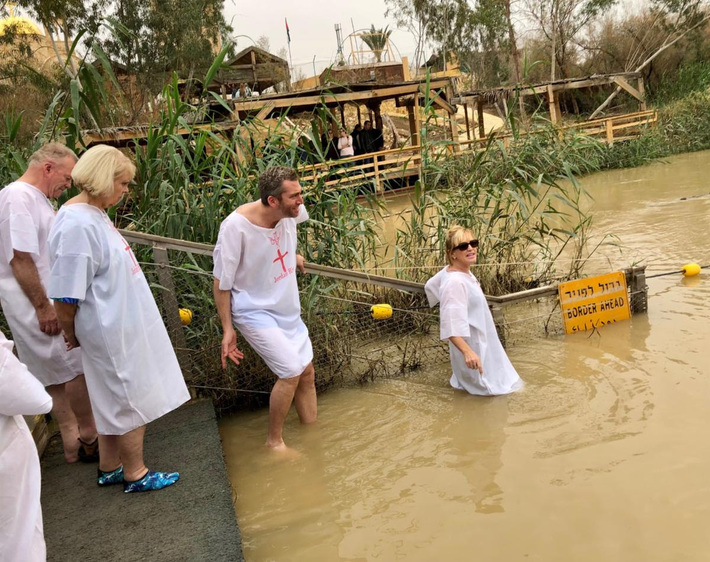 through the perspective of geography?
Listen to this podcast here:  https://www.pastorwoman.net/podcast/episode/30ad6401/the-last-is-a-...
Something hit me at church on Sunday morning…I mean, nobody threw anything at me, of course, but I was overwhelmed by a notion--well, actually a truth that blew me away once again. It is so very critical to who we are, to how we see ourselves and how we see others too.
But first - I would like to take you on a journey to a distant land. It was at dusk on a November day in 2016, and I was in a taxicab traveling through small sketchy Arab retail and residential neighborhoods, making the ascent to the town of Nazareth... Before we rounded the curve into town, our route took us through an Upper Nazareth Jewish neighborhood, but then we heard the loud Muslim call to prayer, followed soon after by the bells of the Catholic church in the old Galilean town.  But when the angel Gabriel came to young Mary to tell her she was to bear the Son of God, Nazareth was a tiny poor Jewish village probably of around 400 people.
The Messiah was to be born in total humility.
Both Joseph1 and Mary’s responses2 to the news of the upcoming holy child could only be described as righteous and very humble.  'May it be to me as you have said,' Mary responded to Gabriel.  After traveling to be with her ‘also expectant’ cousin Elizabeth who delivered Jesus’ cousin, John (who we refer to as ‘the Baptist’), Mary returned home to Nazareth to more challenging news from her betrothed. A Roman decree required that she and Joseph travel to the home of his ancestors in Bethlehem to register. (No door-to-door census taker back then). What thoughts must have been young Mary’s!
The terrain between Nazareth and Bethlehem is rugged and oft desolate, even now.  Joseph and Mary’s difficult journey of about 90 miles south included dangerous, rough travel.3  Once in Bethlehem, you know the story: while the couple usually would have stayed with a relative of Joseph’s, not this time--in fact, there was no room in the over-crowded town to be had.  Instead, the Savior of the world was born in a cave where the animals grazed and bedded down.  The Messiah was indeed born in obscurity and in total humility.
God’s birth announcement and gender reveal was performed by a melodlic band of angels lighting up the skies for a band of Bedouin shepherds, lowest of the low in the local culture.  ‘Today has been born in the city of David a Savior!’  Why would the grand announcement be made to shepherds?  The Messiah was announced to the humble. Does God favor the humble or is it that he comes to those who have time to hear from Him?  Hmmm.
On each of the journeys I have made to Israel, I am greatly impacted by seeing the Jordan River, which looks different at various places. Where Jesus was baptized by John is north of the Dead Sea and not too far from Jericho [the included picture is in that area - Notice the rope in the water--on the side where I am entering the river, Israel--other side of that rope, the country of Jordan]. Jesus was baptized without fanfare, without applause, by his cousin in the same river we can enter today. Humble? Very much so.
Immediately thereafter, Jesus went into the desert for a time of great temptation.  To see that rugged terrain with my own eyes hurt my heart to think of Jesus being out there for 40 days and 40 nights - I cannot even imagine!  Yet this is what he was called to do at the onset of his ministry.  Humility beyond compare - all so that he would understand every temptation we would face in this life, and yet…he did not fall, he did not sin.
So what hit me in church on Sunday?  Jesus’ total sacrifice of anything royal, anything deserving of a King, to be born of a humble virgin, grow up in a poor village, enter ministry through a passageway of great suffering in the desolate desert, and ultimately die alone, naked on a cross.  What struck me was the incredible humility of Jesus Christ all because of his magnanimous love for you and me.
You are loved by the King.
STOP! Do not let noise block out the meaning of that truth. The greatest gift you will ever know is the incredible, overwhelming, magnificent, individual love God has for you.  And that is what Christmas is all about, Friend.  Because of that, you have access to a personal relationship with the King of Kings. [sit with that thought a sec]
One day we will see him face to face, but for now, you and I can meet with him each morning in the quiet ~ all because of that great love.  What a gift!
I am undone by such a love.
I found this song that is worth your time to consider--it is a brilliant work:
Labor of Love, http://www.youtube.com/watch?v=DBmWtX9k6VY
The greatest gift of Christmas is the unfathomable love of God.
Bask in that truth - it will change you,
Christine
PastorWoman.new
1 - Matthew 1.18-25
2 - Luke 1.26-38
3 - great article on their journey for consideration - https://www.latimes.com/archives/la-xpm-1995-12-23-me-17102-story.html