The Bible, me, love story?

Love Story - me, the Bible? 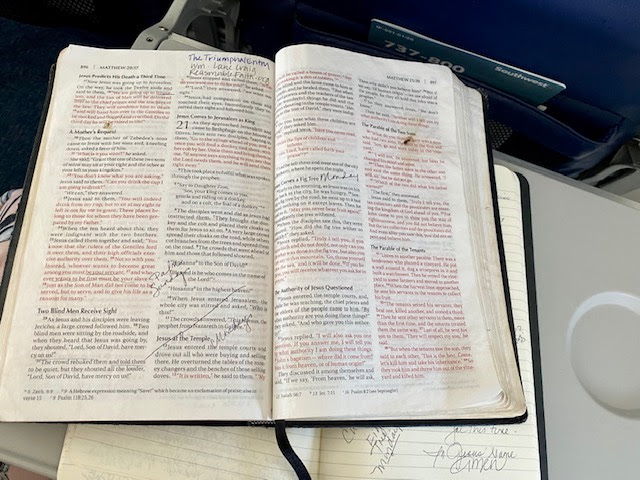 I can’t even make sense of the Bible!
Listen to this podcast here:  https://www.pastorwoman.net/podcast/episode/1a0b662a/i-cant-even-ma...
Every day I draw truths from the precious Scriptures to inform and encourage folks in 146 countries ~ been writing these “Morning Briefings” for more than 12 years now.  The other day I asked what you were ‘aiming at’, quoting from the letter Paul wrote to the Philippians.  More pointedly, at THRIVE on Thursday, I asked our gathering to open their Bibles to find it.  Where to look?  It can feel overwhelming and yes, intimidating if everyone around you seems to know just where to turn!
‘Is there some way I can get a basic understanding of the Bible?’  I have heard the question many times over the years.  First, pick up your Bible - hold it in your hands; that will help orient you.  First, your Bible is not ordered chronologically; here’s the thing—while our Bibles are divinely inspired, the order in which the books of the Bible are placed is not.
So, when you hold a Bible in your hands, what do you have?  If clasping your Bible, your left hand would grasp the Old Testament, and your right hand, the New Testament.  The Old Testament spanned more than a thousand years, while the New Testament just 80 – 90 years, with 400 years of silence in between, (in which God God did not speak).
Old Testament
-It is a written record of the history of Israel, written between 1440 b.c. and about 400 b.c. Once again - remember it is not ordered chronologically.
-There are 39 books in the Old Testament which can be classified as:
The Law of Moses – first five books – also called the Torah or Pentateuch
The Prophets – Joshua, Judges, Samuel, Kings, Isaiah, Jeremiah, Ezekiel +
12 minor prophets - Hosea, Joel, Amos, Obadiah, Jonah, Micah, Nahum, Habakkuk, Zephaniah,                              Haggai, Zechariah, and Malachi.
The Writings – Psalms, Proverbs, Job, Song of Solomon, Ruth, Lamentations,          Ecclesiastes, Esther, Daniel, Ezra, Nehemiah and Chronicles
-The Protestant church accepts identically the same Old Testament books the Jewish people did, and as Jesus and the apostles accepted.  The Roman Catholic Church, since the Council of Trent in 1546, includes 14 books of the Apocrypha
New Testament
-finished before 100 A.D. (Knowledge of that is critical to supporting the veracity of Scripture) contained in 27 books:
The Gospels – the four gospels record the birth, life, death, resurrection of Jesus Christ, and His training of the disciples
History - the establishment of the early church and its spread through Mediterranean lands
Letters – After Paul’s conversion on the Damascus Road in Acts 9, we are able to read his letters to the churches—the ‘epistles’
Apocalypse – the book of Revelation, written by the apostle John when he was on the Isle of Patmos
The NT was written by the apostles of Jesus Christ or companions of the apostles.  This means that the authors were either eyewitnesses of the events they described or they recorded eyewitness firsthand accounts (want more? take a look at: 2 Peter 1.16; 1 John 1.1-3; 1 Corinthians 15.6-8; John 20.30,31; Acts 10.39-42; 1 Peter 5.1; Acts 1.9; Acts 2.22; Acts 26.24-28)
It is valuable to know that the first three gospels (Matthew, Mark, Luke) were written at a time when many were alive who could remember the things Jesus said and did . . . and many would still be alive when the fourth one was written as well (John).  They would have been refuted and the writers discredited if they recounted or represented falsehoods.
Note to self:  Scripture. is. defensible.
Remember that—the gospels were written when people who were alive could have refuted them--their claims about Jesus’ life, death, miracles, resurrection—they didn’t, that is because they were true.
I think of the psalmist—the ‘man after God’s own heart’-who said,
“Your word, O Lord, is eternal; it stands firm in the heavens.” Psalm 119.89
The Bible alone answers the big questions of life: how we got here, why we are here and what happens to us after death.
Because it is alive, it has the ability to speak to us over and over and in unique ways, such as this verse I have been carrying around on a pink 3 x 5 card: The Lord will guide you continually and satisfy your soul in a drought and strengthen your bones. You shall be like a well-watered garden and like a spring of water, whose waters do not fail. Isaiah 58.11.
Check it out: http://www.youtube.com/watch?v=p6-KKBxaFJk, Living Word, Jeremy Camp
Bust it out . . . open it up, your beautiful Bible!
Christine
PastorWoman.com