The Bible Before Printing: Part 4: Techniques of the Scribal Arts: A. Making Parchment: Part II - A Demonstration of Parchment Making

The Bible Before Printing

Part 4: Techniques of the Scribal Arts

During my studies for my Master's Degree(s) at Sorbonne 1977-1980 as part of the research for my Thesis I researched parchment making both in history and modern times. As added bonus besides understanding the entire process of pre-printing bookmaking is that instead of spending $30- $100 per square foot on someone else's parchment, I can make exactly what I want at a much lower outlay of cash.
The following is a series of photographs from one of the informal weekend seminars I started holding at my beach cottage/art studio in 1997 on Crystal Beach, Florida as I was continuing my studies at The Ringling College of Art and Design in Sarasota.
Originally intended as just an informal get together for a few friends at the College, it turned into a requested monthly event for both college instructors and students until my return to Ohio in 2000. I believe all of these photos are from the first such gathering in late January, since Rachel had joined the studio mid-February and she never missed being in her share of photos.
Ok, so here goes "Parchment Making or How to get bloody, sweaty and tired over three days".

First we started with buying several dozen very fresh skins from the slaughterhouse. (Not much cattle raising in Florida so had to use goat and sheep skins).  Here they are in a large wash tub being soaked to loosen feces, dirt, blood and other filth. 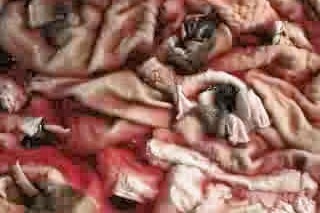 I had a metalworker/blacksmith friend at the college make fleshing knives for the next step. Here you see me showing how to plow off the remaining meat and connective tissue. The wood beam  I am working on is an ancient traditional device used for this purpose: a split log. Wow, back in ancient history when I had dark hair! Some of the workshop attendees busy at the task of removing the flesh. Each student worked dawn to dusk on two skins over the course of the weekend. Many would either attend more seminars or just visit in order to make more as parchment is an incredible media to draw or paint on. 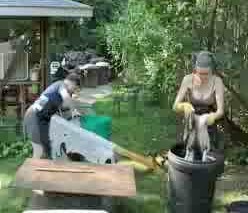 Here a student is preparing the hydrated lime bath in a wood barrel.  The skins are put into the first of two soakings in water mixed with hydrated lime. The first soaking will loosen the hair from the pelt. They will be agitated and turned several times for the entire first day, 3 hours for each bath, during which time we would work on wood frames. have a nice swim, beachcombing, nap, draw or read on the beach 150 feet away. Here we are using a few different hand methods to remove the hair. One is working on the beam with a dull wooden rod, the woman on the left is working on a broader makeshift beam that I constructed from curved plywood and rails, and one is just scraping it away on a flat table with a plastic kitchen scraper. They all work well. When we finish, the skins go into the lime bath for the second time: most took a nice swim to clean up with. Each student had to make a frames 5x7 feet, with holes for 30 pegs. Here one is cutting dowels to make the pegs that serve to attach the skins to the frames. Half the students made theirs during the first soaking, the others the second soaking. 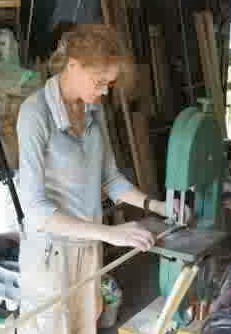 After the second soaking, everyone thoroughly washed their skins. rinsed, then repeated the washing to remove any trace of the lime solution. The skins were rolled up wet and placed in the refridgerator since the day was nearing it's end and it was time for a sunset walk on the beach, then a nice cookout of lots of shrimp freshly caught by the nearby Greek fishing fleet at Tarpon Springs. Usually followed by some serious discussions with alcoholic beverages.

Next day everyone returns and after the traditional Florida artist breakfast strawberry muffins and Greek coffee, we start the difficult job of attaching the skins to the frames. We pushed small roundish stones through from the flesh side and caught them in loops on the hair side. These slip knots were tightened, and then the cords strung out to wrap around the pegs. The pegs are turned to tighten the skins while we scraped them.  We discovered two people working on each frame worked very well, one to keep the frame steady while one tied the skin to the pegs. Here one of the ladies (in the straw hat) from the small Crystal Beach Methodist Church stopped by while strolling through the park by the beach to watch. A wonderful church that I often attended, small but had a lovely mechanical chimes in the steeple that played every hour and every sunset would play "Amazing Grace". During our seminars we would get many visitors from the park or beach users. 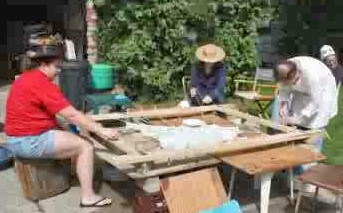 And now the real work begins. Here are some of the students working hard to scrape the skins thin while they are under great tension. The crescent shaped knife they are using is a lunelarum based on a 12th century design that I commissioned my blacksmith friend  to make along with the earlier mentioned fleshing knives. Though mornings can be coolish, most wore clothes that could be removed as the day wore on. Do this for 3 or 4 hours in 90+ weather for a good sweat bath! But, by the time I left Florida after 16 years, I had to wear long underwear if temperature dipped below 60 degrees. 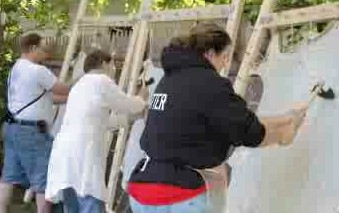 The skins are scraped as smooth as possible with the knives and then we sand them down. This is me sanding with a pumice stone. I tried various methods from hand block sanders up to power disk sander, but never found anything that had more control or did as fine a job as a pumice stone cut into halves and the flat side edges slightly rounded. The key is to sand evenly for a constant identical thickness on the entire skin as thickness determines the color and opacity: uneven sanding produces areas of lighter and darker color and opacity. A very superior parchment is as thin as light weight modern printer paper, but I prefer mine to have the thickness of poster board. After the sanding we wet the skin lightly and wipe it down with another pass with the lunelarum to make sure it is really smooth. Then a final light sanding. 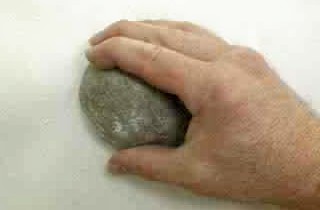 Last chore as we approach sunset again: the skins are wet down completely and the frame dowels are tightened as much as they cab stand. and then tighten them down as much as they can stand. Then they are set aside to dry. As the skins dry under the tension they become whiter and more opaque. No longer just rawhide,  they are now nearly finished pieces of parchment.    And at this point, the second day ends with a toast, and people head home with stiff wrists, arms and backs. 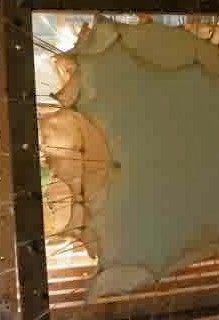 The morning of day 3 and everyone again gathers and check to see if their parchment has completely dried which usually is the case for the Florida weather. Usually each attendee stands next to their frame for a photo, then I cut the skins from the frames. The skins can then be rolled for storage. The next step before using the parchment is to cut the skin into sized sheets for drawing, writing, or folding into folios. A photo of that step will be shown in my section of when I made the Book of  Ecclesiastes as part of my Thesis project commission. Parchment making is a messy job and requires a lot of effort, but it is very rewarding to make your own, besides as I mentioned at the beginning, with parchment priced at $30- $100 per square foot. making your own saves money for the important things in life, like cinnamon gummy bears or a cafe au lait at your favorite coffee shop, not to mention buying canned goods for the local homeless shelter whenever they need it. And well, when one of the seminar's frequent attendees brought along her calligraphy friend Rachel who had never seen parchment that February, well, the Florida sun turned even brighter.