On my recent trip to Israel, I simply adored seeing the places where historical heroes of my faith lived, wrought the miraculous, prophesied, struggled and even warred. One such place was Ein Gedi, located west of the Dead Sea, near Masada and the Qumran Caves. The Bible records that 3000 years ago David hid from King Saul at this place. When David surprised the king in the cave, and chose to spare his life after finding him unarmed, Saul said David would succeed him on the throne.1

May I say it is just awe inspiring to see the waterfall and caves where this event occurred—where the first and second kings of Israel intersected?! See, so many folks think that going to Israel is all about walking in Jesus’ footsteps … and that is wonderful, but it is oh, so much more! Israel is the land of much of the Old Testament as well, and therefore gives sight to scriptures studied, old and new.

But just a bit before this scene in the cave, Samuel records this about David: “he pretended to be insane, scratching on
doors and drooling down his beard.”2
Wait--did you read that carefully? The ‘man after God’s own heart’3 acted like he was crazy. Huh? Who would do such a thing? Fact is, David feigned insanity to save himself, while on the run from Saul. Truth be told, David’s life was something else--he experienced just about everything a man possibly could over his lifetime. But most of us wouldn’t associate insanity with the beloved shepherd, giant slayer, psalmist, and king.

Here’s the thing—David’s behavior of a man not in possession of his mental faculties was a ruse, a way to get himself out of a threatening situation, and ... it worked.

Segue ~ to you and me, today, in the here and now - while it is the beginning of a new year, filled with opportunity for new adventures and personal growth, many of us are struggling mightily just to live each day. Whether it is we or someone we dearly love, struggling with
varying degrees of mental illness—anxiety, depression, severe ADD, bipolar disorder, schizophrenia—
all of it can make looking at the new year daunting and worrisome,
that is to say, not at all exciting.

In many years of writing thousands of Morning Briefings, usually teaching through a scripture or passage, I do not believe I have ever addressed the subject of mental illness straight on; but since it is wracking my life right now, I thought this might perhaps be just the time, tying it to the dawn of a new year.

‘See it could be your child’s inability to function in a so-called conventional classroom, or it could be your husband’s inability to deal with his ‘racing, never slows down mind’ or your mother’s obsessive qualities that keep her from living life to the full, or your own propensity to fall into depression or be overcome by anxiety – it falls within the spectrum of what is commonly called mental illness.

‘The cause of such a thing called mental illness? Could be DNA, could be something else, could even be the result of multiple concussions, like in my family. How to move into the new year?

One day at a time.
One step at a time.
Praying.
Garnering support through believing loved ones.

And then turning to the inspiration of Scripture for strength, wisdom and truth anchors us as no other thing. Paul’s words resonate so strongly with me: Don’t worry about anything; instead, pray about everything. Tell God what you need, and thank him for all he has done. Then you will experience God’s peace, which exceeds anything we can understand. His peace will guard your hearts and minds as you live in Christ Jesus.3

From Isaiah’s words:
You will keep in perfect peace
all who trust in you, all whose thoughts are fixed on you!4

From our Lord:
“I am leaving you with a gift—peace of mind and heart.
And the peace I give is a gift the world cannot give.
So don’t be troubled or afraid.”
‘Struggling? You have a God who loves you, and is bigger than your circumstances . . . a God who is for you,
a God who is with you.
Go confidently into the new year trusting him.

1 – 1 Samuel 24 – Saul actually went into the exact cave to ‘attend to his needs’ where David and his men happened to be. David could have easily killed him; instead, he cut off a corner of his robe without Saul’s knowledge to let him know that he indeed could have killed him, but chose otherwise.
2 - 1 Samuel 21.13
3 – Philippians 4.6-7
4 – Isaiah 26.3 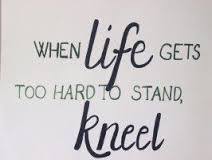