Jesus I get...but the Father not so much

Jesus I get … but the Father John 5.19-24
Listen to the podcast:  https://www.pastorwoman.net/podcast/episode/22b8d6a1/jesus-i-get-th...
[The passage: https://www.biblegateway.com/passage/?search=John+5.19-24&versi...]
“Jesus I kinda get, I sorta understand … but the Father not so much. Can you help me understand more about him?” she asked. A good and right question.
~>Jesus teaches that to know him is to know the Father
because he and the Father are one. If we want to see how God feels about the human condition, we can look at Jesus. We saw it with the lame man who had tried to get into the pool of Bethesda for 38 years when Jesus came on the scene and gave his legs new life. We glean even more now about the connection between the Son and his Father, as we listen to Jesus talk about their relationship~
“So Jesus explained, [having called God his Father, making himself equal with God] “I tell you the truth, the Son can do nothing by himself. He does only what he sees the Father doing. Whatever the Father does, the Son also does. For the Father loves the Son and shows him all he does.” John 5.19-20
Do you want to know all about God the Father? Get to know his Son. And as you are reading about the Son, know that Jesus is a reflection of the Father, and the Father’s love.
So look back at John’s writing about Jesus so far, (as we are just now in John chapter 5), and see the love and prompting of God the Father in Jesus’ heart and actions. Jesus was willing to lay aside his royal position for a time and become a human being - the Word [Jesus] became flesh so that we might become his children. To all who receive him, to those who believed in his name, he gave the right to become children of God. [John 1.12] Why? Because it is the heart of the Father that we would be his children.
First thing I notice about the heart of God the Father by looking again at Jesus: He wants to be our Father - to love and have relationship with us.
As Jesus began his work, he invited ordinary people to be with him--first up,
fishermen. Second thing I notice about the Father by looking at Jesus: the Father extends relationship to the simple man, to any and every man [person]. He is not caught up in looks or prestige or station or race, gender or denomination.
Third thing I notice about the Father by watching Jesus (just in our reading of John this far): The Father is moved to action by what concerns us. John chapter two recounts Jesus’ first miracle. ‘Crazy because no one was sick, no one had died - no, that is not what pressed Jesus into action. It was the request of his mother for a local villager, so that the family would not have to feel shame by running out of wine at their wedding celebration. Amazing. The Father is moved to action by what concerns you when you go to him.
And then I notice how the Father feels about women: Remember the woman at the well? (John chapter four). Think of it, God the Father had Jesus go through no man’s land, enemy Samaritan territory, to have a divine encounter with a woman almost no one had respect for, including her own self. Why did Jesus go to meet this woman in the middle of the day? Because the Father will go to any length, in spite of what the culture says is acceptable, to have relationship with us.
So Friend, as we continue into the life of Jesus ~ how he lived and loved ~ know that you are watching the heart of God the Father in action.
Let this knowledge inform, impassion and embolden your prayers! What concerns you? Take it to your Father in prayer. About whom are you concerned? Carry them to the Father in prayer - lay them at his feet; they are not yours to carry alone!
Yes, we have a good, good Father . . . as Jesus takes his cues from him!
Christine
PastorWoman.com 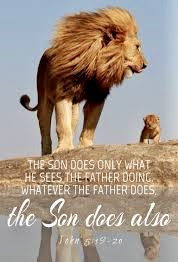