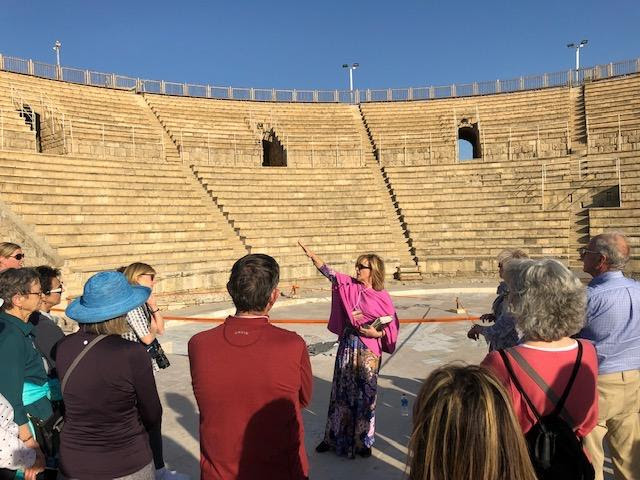 Listen to this podcast here:  https://www.pastorwoman.net/podcast/episode/40645c69/and-the-headli...
If I’m honest, it sometimes seems like God takes it on the chin.  Like really - my unbelieving friends probably think God is a bit of a weakling, just hoping people will consider he is real, hoping they will recognize he is powerful and can do all things.  But because we live at the time we do, God is oft cast in a weak impotent position, the position of the beggar.
Picking up my Bible I look back and I remember those who rejoiced in the Holy Spirit but also suffered much in the early church in Jerusalem . . . have I mentioned how I love the gates and corridors of the beautiful old city?  How could it be that God allowed wicked Herod Agrippa to kill James, passionate church leader, and imprison Peter without impunity also in Jerusalem, as we read here in Acts chapter 12?  First century folks must have thought the line of ‘Herods’ got away with murder…right?  Well, it turns out that God does keep score . . . does have his eye on the ball and as he said in the Old Testament and Paul repeats, “Vengeance is mine, I will repay.”*
Herod Agrippa heads out for Caesarea - the Roman seaport along the Mediterranean Ocean - yes, the same town in which we recently encountered Roman officer, Cornelius.  [If you have been blessed to go on a pilgrimage to Israel, this is likely your first stop. The rows of seats are behind me in the picture above.]
Soon after arriving back in town, Agrippa sits on a throne and addresses the crowd gathered in those rows of seats facing the Mediterranean Sea.   They laud him by shouting, “This is the voice of a god, not of a man.”12.22. But then, because Agrippa did not turn that praise toward God, but accepted it as his own, God struck him down, and he died.
Interestingly, Flavius Josephus, Jewish historian on record for the Romans, cites that it actually took Agrippa five days of agony before he died. For our purposes, the gruesome causes of death are immaterial I believe; but suffice it to say, that no man escapes the judgment of an almighty, all-righteous God.
Why does this matter to you and me today?  Because there are a lot of wrongs that need to be righted.
Wrongs?
~there’s the husband of my friend who left her, all but destroying her and the kids…
~and my friend who lost the life of her precious daughter to an evil husband…
~my son who suffers with epilepsy because some ne’er do well struck him in the
head while he was leaving a San Francisco sports bar
~women I know who had their innocence and so much more stolen by someone
they should have been able to trust
~injustices in the world, injustices in the workplace . . .
You can name people who have been wronged, others who may have literally gotten away with murder . . . except they. will. not.  God has the last word--just as he did with a villainous, murderous, prideful Herod Agrippa.  That is good news.
Time to let go of the bitterness, time to stop the bleeding within, hit the shut-off valve and let go of undeserved shame.  God sees.  God saw.  He keeps the score so you and I do not have to do so any longer.
Rest your case with God - he has greater things for you, Friend.
O, this song, “Greater Things” by Mack Brock-http://www.youtube.com/watch?v=NueMKnU8qa0
Let’s let God be God~
Christine
PastorWoman.net
* - Romans 12.19