A battle of wit vs. wisdom

Brilliant Grace and Reason. John 8.1-11. John #36
~a battle of wit vs. wisdom
Listen to this podcast:  https://www.pastorwoman.net/podcast/episode/f5167a0d/a-battle-of-wi...
Clever, pithy, succinct, smart - what a person must be like in order to compete in a battle of wit. Oh, and one more thing - knowledge of the opponent.
On this day, the Jewish leaders knew they 'had' Jesus right where they wanted him; they were going to outwit Jesus and discredit him for sure. The problem is they were truly unarmed.
John writes:  “Jesus went to the Mount of Olives. At dawn he appeared again in the temple courts, where all the people gathered around him, and he sat down to teach them.  [friend, Jesus could easily walk down the Mt. of Olives, across the Kidron Valley and up the short grade to the Temple Mount] The teachers of the law and the Pharisees brought in a woman caught in adultery. They made her stand before the group and said to Jesus, “Teacher, this woman was caught in the act of adultery. In the Law Moses commanded us to stone such women. Now what do you say?” They were using this question as a trap, in order to have a basis for accusing him.
But Jesus bent down and started to write on the ground with his finger. When they kept on questioning him, he straightened up and said to them, “Let any one of you who is without sin be the first to throw a stone at her.” Again he stooped down and wrote on the ground.
At this, those who heard began to go away one at a time, the older ones first, until only Jesus was left, with the woman still standing there. Jesus straightened up and asked her, “Woman, where are they? Has no one condemned you?”
“No one, sir,” she said.
“Then neither do I condemn you,” Jesus declared. “Go now and leave your life of sin.” John 8.1-11
Her sin was of the most intimate kind, and there was no denying it as she had been caught.  And so the ‘authorities’ brought her to the temple to have a rabbi decide her fate, a common practice on such matters.  Oh, who knows why the religious men did not drag her partner in crime along for sentencing, but they didn’t!  No matter.  Jesus’ handling of the situation was brilliant.
The fact is, the accusing men probably did not even know this woman’s name; to them, her name was ‘Reason’—a Reason to trap Jesus.  The Pharisees and the other teachers of the Law had been looking for a way to get rid of him and discrediting him would go a long way in that effort.  So they grabbed Reason, dragged her into the Temple courts where Jesus was sitting, teaching the people who had come to hear Him.
Here is what you must understand about this scene: adultery was a serious crime under Jewish law—one of three crimes punishable by death, (the other two being murder and idolatry).  Stoning was the punishment the Law prescribed for Miss Reason, so Jesus could not say anything less or he would be guilty of breaking Jewish Law.  However…under Roman law, the Jews were forbidden to sentence anyone to death, much less carry out the death sentence.
‘Ah, we’ve got him,’ they thought.  ‘If this Jesus says ‘stone her’, all his followers will see he is not really the teacher of love and forgiveness he has painted himself to be, but he must say ‘stone her’ or he will be in violation of the Law … and word will quickly get to the Roman authorities that he is passing death sentences, and they will get rid of him for us!’  So the stage is set. [Seems plausible, I suppose . . . but, Jesus.]
Jesus remains quiet, choosing to write something in the sand with his finger.  Do you see it? The men are standing there demanding a verdict from Jesus, but Jesus does not answer them. Instead, Jesus remains seated right where he has been teaching with the people all around him. Miss Reason waits as well—disheveled, humiliated, daring not to lift her shamed head, certain of her sentence. Mysteriously, the rabbi does not condemn her! Jesus silently leans over and writes in the sand.
Picture it… the men had come into the Temple courts with rocks in their hands—literally—eager to throw stones at another’s sin.
But then, Jesus says, ‘Okay, whoever is perfect among you—you throw the first rock at Reason.’   This time it is the men who are silent.  At first, no one moves, but then, one by one, the rocks hit the dirt and the religious people walk away, disarmed by grace.
Brilliant.
It is easy to look around and see another's folly, isn't it?
It is easy to look around and take note of someone else's sin, but then
I remember my own, and I drop any rocks I have in my hands ... or head.
To those of you sizing up Jesus - Who He Is/Was -
besides miraculous, you must add SMART.
Or as they say in Boston, wicked smaht.
Christine
PastorWoman.com
p.s. Got Boston on my mind a little as Danny returns to university in a little over a week. 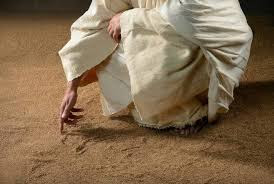