Why didn't they run? 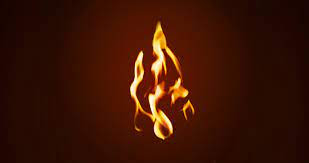 Why didn’t they run?
Acts, 9 in the series.
Listen to this podcast here:  https://www.pastorwoman.net/podcast/episode/2545f255/why-didnt-they...
by the way, this is a great one to listen to! Click the "Listen to the podcast" link above!
It was noisy, there was fire . . . it was crazy that morning the Holy Spirit came to town.  Luke says it sounded like a mighty rushing wind; in other words, it was loud!  As they looked from one to another, each had something that looked like a flame on his head . . . what in the world was going on?  Why didn’t they run for it, getting the heck out of there?
Imagine being in that room, as Luke described what happened: Then when the actual day of Pentecost came they were all assembled together. Suddenly there was a sound from heaven like the rushing of a violent wind, and it filled the whole house where they were seated. Before their eyes appeared tongues like flames which separated off and settled above the head of each one of them. They were all filled with the Holy Spirit and began to speak in different languages as the Spirit gave them power to proclaim his message.1
It has been almost two months since I moved to North Carolina.  One of the first weekends I was here, there was a crazy storm overnight--thunder, lightning and wild winds.  Since I have huge, tall trees on my property, the sound of the wind was something else; I am not easily scared, but I gotta tell you--the wind was crazy loud!  Now imagine being in an enclosed room, such as the 120 followers of Jesus were that morning, when suddenly the sound of a violent wind filled the room.  Add to that, there was the flames they could see, followed by the different languages they started speaking.  I think if I had been there, I would have run for the hills--actually, I guess it would have been nearby Mt. Zion and Mt. of Olives.  Hmmm... or would I have run?
Scripture does not say a single one of them was frightened, no one left the room.  Why?  Because these Jewish people were familiar with God’s ways.  Hadn’t God spoken to Job out of a whirlwind?2   Hadn’t Elijah been taken up into heaven in a whirlwind, right before Elisha’s eyes?  Indeed.3. And Jesus himself, when talking to Nicodemus, said “The wind blows wherever it pleases.  You hear its sound, but you cannot tell where it comes from or where it is going. So it is with everyone born of the Spirit.”4
As for fire, they knew that God had made his presence known to Moses in a fiery bush…5 why, he spoke to Moses from that bush, charging him to go back to Egypt and set the Israelites free!  And then on their way to the Promised Land, how well they knew the story of how God led their forefathers through the desert with a pillar of fire by night.6
As I look at the scripture passages (noted at the end), I see how when God made his presence known, it was often to empower and then embolden ordinary people for a mighty work… a purpose only he could give them.
This was it.  This was that which Jesus had spoken of from the hillside outside Jerusalem, some 10 days before.  “But you will receive power when the Holy Spirit comes upon you…”7
So, no, they did not tuck their garments between their legs and run like crazy.  They were ready.  They had done what Jesus had told them to do--stay together, wait… watch and pray.  And he came, making his undeniable presence known--through wind, fire and the message that Jewish pilgrims would take back to their homelands.
Miraculous? Sure.
Amazing? Without a doubt.
Unique? Totally…never before and never since.
I believe when we wait, watch and pray, he comes to us as well.  And when he comes, just as the 120 knew, so will we.  Like those who heard, saw and spoke out the works of God, we too will be ready to step into the purpose for which he has created us.
Check out the lyrics from a verse in this song; it plays over and over in my mind: "...And the church of Christ was born, then the Spirit lit the flame
Now this gospel truth of old shall not kneel, shall not faint...
By His blood and in His name, in His freedom I am free
For the love of Jesus Christ who has resurrected me...."
Oh, don't miss listening to this! King of Kings, https://www.youtube.com/watch?v=avBnNQ44yn4
Christine
PastorWoman.com
1 - Acts 2.1-4, J. B. Phillips Translation
2 - Job 38.1; Job 40.6
3 - 2 Kings 2.11
4 - John 3.8 reads
5 - Exodus 3
6 - Exodus 13.21
7 - Act 1.8