when empty is a good thing 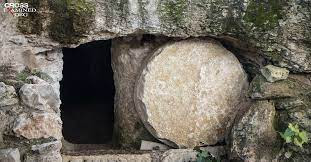 Listen to this podcast here:  https://www.pastorwoman.net/podcast/episode/1c0f2600/when-empty-is-...
Empty is seldom a good thing. Think of it--whether it is your gas tank, your toothpaste tube or your oatmeal carton, 'empty' is a bummer. Except of course for one very early morning long ago.
“Early on Sunday morning, while it was still dark, Mary Magdalene came to the tomb and found that the stone had been rolled away from the entrance. She ran and found Simon Peter and the other disciple, the one whom Jesus loved. She said, “They have taken the Lord’s body out of the tomb, and we don’t know where they have put him!”
Peter and the other disciple started out for the tomb. They were both running, but the other disciple outran Peter and reached the tomb first. He stooped and looked in and saw the linen wrappings lying there, but he didn’t go in. Then Simon Peter arrived and went inside. He also noticed the linen wrappings lying there, while the cloth that had covered Jesus’ head was folded up and lying apart from the other wrappings. Then the disciple who had reached the tomb first also went in, and he saw and believed— for until then they still hadn’t understood the Scriptures that said Jesus must rise from the dead. Then they went home.”  John 20.1-9
Mary Magdalene was stunned when she found that the huge stone had been rolled away from Jesus’ tomb and his body was gone.  She did not enter the tomb, but turned around and ran to tell the disciples. Peter and John, (John, the disciple and our author), go back with Mary to see the tomb for themselves.  Was Mary hysterical?  Had she possibly gone to the wrong tomb by mistake?  If Jesus really was not there, could mayhem be involved?
Put yourself in the place of these three disciples of Jesus that morning … what a few days it had been!  There had been Jesus’ arrest, fast conviction, his flogging and then crucifixion … he whom they loved had been killed!  The one who had turned their entire understanding of religious truth upside down was no longer with them.  The one who had taught them about the love of their heavenly Father and taught them how to love others, had been savagely murdered.  How could God let that happen?  They were exhausted, physically and emotionally--scared, sad, lonely and wondering what was to become of them.  After all, anyone who had been with Jesus was now suspect.
And here we have these scenes at the tomb … please do not miss the love.  Mary Magdalene loved and adored Jesus; why think of it, she went practically in the dark all by herself to be near his tomb!  Only love constrains one to do such a thing.  Oh, how Mary loved her Lord Jesus.
She runs to get Peter and John, who return to see the miraculous—Jesus’ tomb is empty.  John gets there first, but does not enter—who knows why?  Was he respecting the sanctuary of the dead or was he unwilling to become ceremonially defiled by entering the grave?  It is Peter who rushes in and observes the head cloth in its place, separated the right amount of space from the neatly wrapped body linens, just as if the body had evaporated.
But notice this with me in verse 9 – “Then the disciple who had reached the tomb first also went in, and he saw and believed.”
Three. Mary Magdalene was the first to view the empty tomb—she who loved Jesus Christ so dearly.  John, ‘the disciple who Jesus loved,’ was the first to see and believe—believe that Jesus had done what he said he would do—rise from the dead!  LOVE at the tomb . . . LOVE SEES.  Oh, and in the man John we see one more thing, LOVE BELIEVES.
Because he Lives, Matt Maher: https://www.youtube.com/watch?v=I7ft1rVMANE
Because he Lives, we live!
Christine
PastorWoman.com