Seven billion people on earth, diverse races, different faces, yet God has made everybody unique with our different tendencies, personality and character and you know what? He loves every single one of us just as we are!

I love to do a study of characters in the bible and I believe that for every one mentioned, even if it’s in one single verse of the scriptures, they are mentioned for a reason and there always will be something to learn from them.Two ladies that come to mind this morning are the sisters of Lazarus; the friend of Jesus that was raised from the dead. That family was especially close to Jesus and He loved them dearly.Only a few people had the rare privilege of having Jesus come visit them in their homes. We recollect He was at Peter's house and He raised His mother in law from fever, He was at Zacchaeus's house and also at the house of the siblings known as Mary, Martha and Lazarus.

Now it happened as they went that He entered a certain village; and a certain woman named Martha welcomed Him into her house. But Martha was distracted with much serving, and she approached Him and said, “Lord, do You not care that my sister has left me to serve alone? Therefore tell her to help me.” (Luke 10:38, 40 NKJV).

We see that Jesus was quite close to them as he was going to have lunch in their home, but as usual; never losing focus on what He was sent to do, He started to teach whilst waiting for food. Someone needed to get lunch ready and we see Martha playing the perfect hostess. That was her core area; doing what she loved doing; organizing things, setting up for events, catering, etc. She just had a knack for doing all of those things and ensuring everything was hunky dory . So whilst Jesus was teaching, with Mary at His feet, aptly learning,  Martha was all over the house, putting everything in place to make the Master comfortable. She couldn't hide her disgust when her sister refused to lend a helping hand and she blurted out in anger asking why Jesus would allow her sister sit at His feet whilst she was cooking and getting the table set.

We can conclude easily that Martha was the outgoing one. She probably met Jesus at a crusade and being an extrovert she was, she was able to convince him to come to her house where her sister was as well. On the other hand, we see a more introverted Mary whose priority was feeding on the word and building herself up spiritually. She wasn't a hands-on person but more of an intellectual and into herself kind of person. Jesus must have gone to their house several times but on two out of the three recorded occasions when Jesus came into their house (the third was when Jesus came to raise Lazarus from death), she was always with Him, learning, asking and answering questions and reasoning with him . She was always found at the feet of Jesus.

There they made Him a supper; and Martha served, but Lazarus was one of those who sat at the table with Him. Then Mary took a pound of very costly oil of spikenard, anointed the feet of Jesus, and wiped His feet with her hair. And the house was filled with the fragrance of the oil. (John 12:2, 3 NKJV).

Mary did something so significant and unforgettable that landed her recognition in the bible and for which eternity will remember her for. She broke a box of oil that could have been sold and anointed Jesus with it. She did not only anoint Jesus but the fragrance of her act affected the entire house including everyone sitting in there as the house was filled with the fragrance of the oil. The oil was an expensive one and it might have costed a fortune but she knew what mattered was giving her best to her Master, Her lover. She might not have been able to cook but she knew what to do to touch the Saviour’s  heart and that she did. We however see Martha doing again what she knew how to do best; serving.

4But one of His disciples, Judas Iscariot, Simon’s son, who would betray Him, said, 5“Why was this fragrant oil not sold for three hundred denarii and given to the poor?” 6This he said, not that he cared for the poor, but because he was a thief, and had the money box; and he used to take what was put in it. 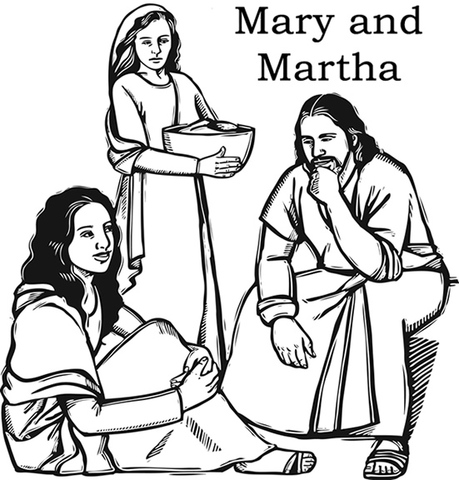 Mary had insight, talking about anointing the Master but we see that her actions and acts were prophetic. Jesus attested to that. What she had just done was to prepare Him for his burial! On the other hand, Martha ministered to the Savior’s physical needs by providing food for Him and for any human being; food is an important factor in existing. Even though Jesus was the Savior of the world, he came in the flesh and He was also hungry from time to time and must have needs for food just like you and I do. In fact, I am tempted to say that after the 40 days fasting he started his ministry with, He might just have been fasting as the needs arose hence, he must have eaten like every other person. Mark 11 verse 12 says Jesus was hungry. So Martha ministered to that area of Jesus life whenever he was there because that was her area of gifting but Mary connected with him on another level entirely. Give it to both of them, they were sisters but differently wired.

There's no point for unhealthy comparison, no point running another’s race. The Master created you, wired you up, knew you whilst you were not yet conceived yet He loves you so much just as you are. He doesn't play partiality or favouritism, He reckons with you based on the giftings he has put in you. Just as the car is made to be driven on the road, the ship to sail on water and planes to fly, God won't expect you as a car to fly or a plane to sail on water! Martha was forward and aggressive but Mary was gentle and calculative. Remember the incident at Lazarus’ s burial?

Martha had gifted hands of helps but Mary had an intellectually sound and receptive mind. In whatever capacity you've been assigned to serve, whatever your giftings maybe, whatever God is doing through you, be glad for it. If you are called to preach, do it heartily; to sing, do it with joy; to wash the toilets in church, wear a beautiful smile as you go about it. Whatever it is, as you stay in your calling, you definitely will be celebrated. You are so special and what you do is beautiful in His sight. Quit the comparison race, be challenged by what others but don't become envious and out of envy start to pull them down. It is unfair to envy and back bite people who are successful forgetting that that they must have paid their dues for it.

Friend, it's time for you to be celebrated, love yourself, love your giftings just as the master loves you. Whether its Martha's hand, or a Mary’s, mind; a conspicuous ministry, or the less pronounced ministry, just give your best!

Comment by Sola A on December 9, 2013 at 11:00pm
Thank you for reading Kay Johnson, God bless you much. Please fel free to share

LORD THANK YOU FOR CREATING US ALL DIFFERENT AND UNIQUE. YOU'VE GIVEN US ALL PRECIOUS GIFTS TO USE TO YOUR GLORY. CAUSE US TO BE HUMBLE IN ALL THAT WE DO, ALWAYS REMEBERING EVERYTHING IS BY YOUR PRECIOUS HAND . IT'S ALL ON LOAN, EVEN OUR CHILDREN. THE VERY CLOTHES ON OUR BACKS ARE YOURS. THANK YOU FATHER FOR YOUR GRACE AND INDIVIDUALITY. CAUSE US TO LEARN FROM AND APPRECIATE THE DIFFERENT RACES. WE CAN LEARN SO MUCH FROM EACH OTHER. FATHER I COME AGAINST PREDJUDIS, CAUSE US TO LOVE AND EXCEPT EACH OTHER AS YOU. YOU SO LOVE VARIETY, WHEN WE LOOK AROUND AT ALL EEYOU'VE CREATED IT'S SO OBVIOUS, WE ARE ALL SO BEAUTIFUL AND DIFFERENT IN OUR ON WAY. YOU CREATED YOUR PEOPLE IN DIFFERENT COLORS, JUST AS YOU CREATED YOUR FLOWERS, BEAUTIFUL!!! OPEN OR EYES TO THE BEATY OF YOUR CREATIONS, IN JESUS NAME. THANK YOU FOR HIS PRECIOUS SISTER AND HER WORDS OF WISDOM!!!