Jesus comes to you 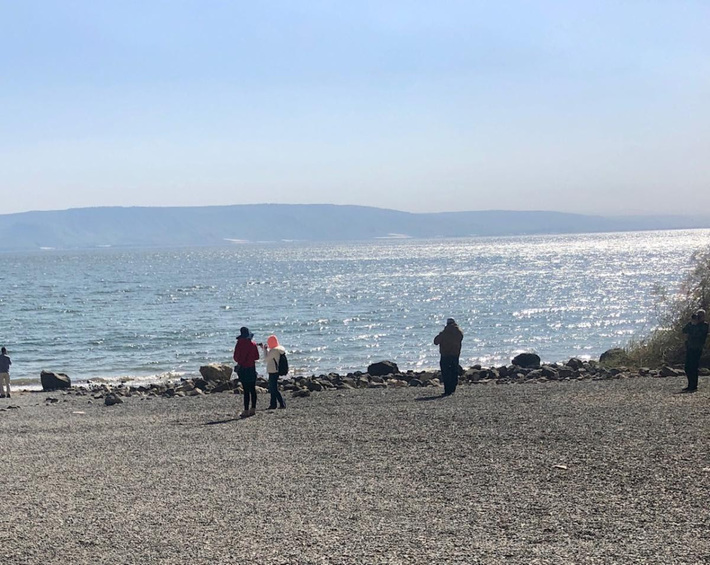 Jesus Comes because He Loves.
Listen to this podcast here:        https://www.pastorwoman.net/podcast/episode/2b831b67/jesus-comes-to...
Click to read John 21: http://www.biblegateway.com/passage/?search=John+21&version=NLT...
At dawn Jesus was standing on the beach… “Now come and have some breakfast!” Jesus said…Then Jesus served them the bread and the fish… This was the third time Jesus had appeared to his disciples since he had been raised from the dead.
[picture of that beach on the Galilee]
From the Lord’s coming to us in the humble form of a helpless baby to the preaching of a radical new life filled with love rather than laws, to the cross, to the tomb and now to a beach on the shoreline of the Sea of Galilee.  Jesus comes because he loves.  As we open our Bibles to the end of John’s gospel, chapter 21, we see the Lord coming to the disciples who have returned to the familiar—their fishing nets.
The disciples have apparently fished all night, but caught nothing.  Jesus comes to them at dawn, calling to them from the shore.  The scene harkens back to another time when Jesus tells them to cast their empty nets on the other side of the boat, bringing them great success.  It is Peter who first realizes it is Jesus, which is significant.  The truth is, if Jesus comes to anyone that day, he comes to Peter.  And Peter seems to have returned to his impetuous self as he jumps in the water to get to Jesus as quickly as he can, longing to be near Jesus!  O, let us not forget it had not been long since Peter had denied his Lord not once but thrice, though he had been warned he would do so.
Jesus comes to the disciples that morning, but he especially comes to Peter.  Jesus seeks out Peter to restore him to himself, to make things right.  Jesus comes to extend forgiveness to Peter—he knew the plans, the destiny he had in mind for this son of his!  Peter had denied Jesus three times and accordingly Jesus asks Peter three times, in three slightly different ways if he loves him, each time making the space between them smaller and the grace greater.  Jesus comes with the offer, Peter responds and is restored, and made ready for greatness.
~Jesus comes to us to extend himself to us …
to show us love when we need it more than food or drink;
~Jesus comes to us to extend his grace to us when only grace will do because only grace will cover the wretchedness of who we really are inside.
~Jesus comes to us in the wonders of creation all around us—why, look up, look outside!  Consider closely the rays of sunshine that make the raindrops falling from soaked limbs and leaves look like liquid silver … the perfect milky white skin of a newborn babe and the sparkle in his innocent shining eyes … the pouncing puppy that brings laughter to a home and love to the lap of a hurting man … the deeds of a doting husband caring for the sentimental details of his beloved wife … all of these are but glimpses of the Savior who comes …
And of the One who is yet to come again in the splendor of the clouds leaving no mistake of his grand arrival.
Yes, Jesus comes to the shore that morning because he loves; Peter and the disciples respond in love, and go to meet him.  Consider the myriad of ways Jesus comes to you in love . . . go out and meet him! Grab ahold of the hand he extends to you.
Carrie Underwood has a new album of beautiful old hymns, like this one: Softly and Tenderly, https://www.youtube.com/watch?v=h5OLMQ7WdD8
Jesus comes because he loves,
Christine
PastorWoman.com