Inspiring things I see in Isaac.....

As the year wraps up, it’s a good time to reflect on what God has done for us in the course of the year. A faithful God He is! You might not be where you want to be, be rest assured that with God in the equation, you are doing just fine... Be grateful! We will be doing a character study of the life of Isaac in this post. Something in the scriptures caught my attention lately and it is the fact that of the three patriarchs in the Bible, only Isaac didn't have his name changed. We remember Abram had his name changed to Abraham whilst Jacob to Israel; both men by God, however, Isaac didn't have any need to change names because God gave Abraham his father a name for him when he had not even been born. “Then God said: “No, Sarah your wife shall bear you a son, and you shall call his name Isaac; I will establish My covenant with him for an everlasting covenant, and with his descendants after him. Genesis 17:19

Isaac was the first( after Adam) amongst the few persons recorded in the Bible that God named. When you are named by God, there's never any need to have your name changed. He names you by What He has purposed for you. For you and I, God may not have appeared to our parents to give a specific name for us but  Hallelujah, we have a God, of whom the whole family in heaven and earth have been named( Eph 3:115)

So back to Isaac's story, I got motivated to study his life beyond the surface. Such a great man he was. As earlier pointed out, of the three patriarchs, he din't have his name changed, He didn't move out of Canaan all through his life and he lived longer in age than the other two patriarchs. I realized also, that there were fewer incidents in his life compared to his father’s and his son’s –Jacob yet he lived a successful life.

I have picked out 8 distinct things (8Ps) in his life that made him such an iconic person.

1. Pampered (but not spoilt)

To a large extent, from childhood, He was someone who had everything already prepared for him. He simply entered into the harvest of his father’s labor. Right from his early days, he enjoyed a lot of attention and love.  We remember his father throwing a feast for him when he was weaned and because his half-brother- Ishmael mocked him, He was literally banished alongside his mother Hagar. His father had paid a price for him and all he had to do was to enjoy God’s blessings. He was a pampered boy but he wasn't a spoilt brat.

When the time came for Marriage, he sat at home whilst his father's servant went searching for a wife for him. God was merciful to him; he got a blessed, God-fearing   and favoured woman without taking a step out of his home.

And Abraham gave all that he had to Isaac. But Abraham gave gifts to the sons of the concubines which Abraham had; and while he was still living he sent them eastward, away from Isaac his son, to the country of the east. (Genesis 25:5, 6 NKJV).

Lesson 1 : Never take for granted whatever God has blessed you with. Make good use of it.

He inherited all His father gave him, yet God blessed him immensely. Not just because of the promises of God, he worked hard also. He didn't go to sleep with all he inherited. He was hard-working; sowed in the land and reaped a hundred fold. He had servants and he made good use of their services.  It was apparent he had the genes of prosperity in him; nonetheless by being hard-working, he enjoyed God’s blessings maximally.

Then Isaac sowed in that land, and reaped in the same year a hundredfold; and the Lord blessed him. The man began to prosper, and continued prospering until he became very prosperous; for he had possessions of flocks and possessions of herds and a great number of servants. So the Philistines envied him. (Genesis 26:12-14 NKJV).

And it came to pass, after the death of Abraham, that God blessed his son Isaac. And Isaac dwelt at Beer Lahai Roi. (Genesis 25:11 NKJV)

Lesson 2: When God is with with you, whatever it is you lay your hands on will prosper. Don't be deterred by your current circumstances. Keep moving!

Abraham his Father was someone who walked with God. We know him as the father of faith and a friend of God. God gave Him an assurance, a promise 25 years before Isaac came that He was going to give him a seed in the person of Isaac. Like I earlier mentioned, God gave his name even before he was born. He was prepared for such a time as that and being promised many years ahead of time, He came just at God’s appointed time.

Lesson 3: You are a promise to your generation and generations unborn. Do not fail them!

He had a specific purpose; as revealed before He came into the world. He was the seed of Abraham in whom all the earth would be blessed.  God had successive interest in him and He was an object of God's special interest. He understood this and obeyed God to the letter. God demanded that Abraham sacrificed Isaac, his beloved child; typifying what God Himself was going to do with Christ- send Jesus to die for the sins of the world. Isn't it amazing that God called Isaac Abraham’s “only son” . Look at the scripture below.

Then He said, “Take now your son, your only son Isaac, whom you love, and go to the land of Moriah, and offer him there as a burnt offering on one of the mountains of which I shall tell you.”(Gen22:2)

Lesson 4: Have you identified why you are here? The secret to achievement lies therein!

It came to pass, when he had been there a long time, that Abimelech king of the Philistines looked through a window, and saw, and there was Isaac, showing endearment to Rebekah his wife. (Genesis 26:8 NKJV)
He was a devoted family man, passionate and romantic as well. The Bible recorded him “sporting” with his wife even in old age. We would recollect He married at 40, had his children at 60 and as at the time he moved to Gerar, we have no idea how old he was; probably in his 70s but the bible recorded King Abimelech saw him “fondling his wife” (Message Version).

Lesson 5: Love your wife dearly. Even in old age, when the chips are down and the body has lost all the youthful vigour, be satisfied from your own cistern...

When God told Abraham his father to go sacrifice him, on their way, He asked his father where the ram for the sacrifice was. As events unfolded, it however dawned on him that He was the “Ram” to be used. He was grown and could have wrestled his dad to resist being tied down and used as a “sacrifice” but he was ready to let go. That was great faith and a heart of giving at display.

Then they came to the place of which God had told him. And Abraham built an altar there and placed the wood in order; and he bound Isaac his son and laid him on the altar, upon the wood. 10And Abraham stretched out his hand and took the knife to slay his son.( Genesis 22:9-10). 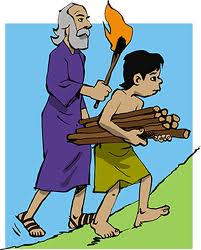 We recollect also from the bible that at different times, when his servants dug wells and found water, the enemies strove with them but each time, he let go and God kept opening up new areas for him!

Lesson 6: You can never out give God. Whatever you sow, you reap!

He was a threat to his enemies. From the scriptures, we see that after they had sent him away, by reason of what God was doing in his life; they came back seeking for him. And Isaac said to them, “Why have you come to me, since you hate me and have sent me away from you?” But they said, “We have certainly seen that the Lord is with you. So we said, ‘Let there now be an oath between us, between you and us; and let us make a covenant with you(Genesis 26:27, 28 NKJV)

Lesson 7: God has made you powerful. Walk in the image of your Maker. Refuse to be intimidated by what life hurls at you!

His life was a first-rate. He had a Midas touch. For every well that had been blocked, each time his servants dug again, they found water. And whenever his rivals laid claims to the well and his servants dug another one, they encountered water. Everything He touched turned into gold!
And he moved from there and dug another well, and they did not quarrel over it. So he called its name Rehoboth, because he said, “For now the Lord has made room for us, and we shall be fruitful in the land.” Genesis 26:22

Lesson 8: Aim to be your best version always. God made you unique!

May God make our men as powerful and more powerful than Isaac. May all the virtues we have identified in him be replicated in their lives a thousand times and more! Because we are the seeds of Abraham, Isaac and Jacob, we have a right to all the blessings they enjoyed. The same God who worked great things in their lives is at work in our lives to work greater things!