The act of Faith in God as exhibited by some people in the bible is something I don't seem to get over easily when I study the word sometimes. Over and again, I have heard sermons and read the story of Shadrach, Meshach and Abednego but as I read it again a couple of days ago, I couldn't but wonder about the capacity we potentially possess to believe God in the face of the most daring situations.

A King who had seen the raw power of God at work through the life of Daniel relapsed into a state of vanity and irreverence for God. I am talking about none other than Nebuchadnezzar the King of Babylon. He had earlier had a dream and he needed someone not just to interpret the dream but relay the dream just as he had it. Naturally, it is impossible for one to relay a dream someone else had accurately, without the person giving you a hint. To say accurately what another person is  thinking is  difficult and almost impossible as it were , not to talk of narrating what the person dreamt about in the most accurate and precise manner. The Omnipotent God of Daniel revealed the King’s dream to Daniel and that alone made the King stand in awe of the God Daniel served.  His reaction when Daniel relayed the dream and interpreted it, is narrated in Daniel 2. 46Then King Nebuchadnezzar fell on his face, prostrate before Daniel, and commanded that they should present an offering and incense to him. 47The king answered Daniel, and said, “Truly your God is the God of gods, the Lord of kings, and a revealer of secrets, since you could reveal this secret. 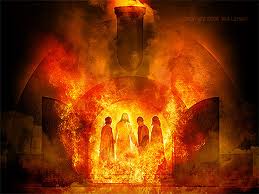 After seeing such an amazing act of God, this same King decided to mount an image of gold before which everyone was to bow. The three men mentioned above refused to bow to the image and they were reported to the king. This same King that had tasted God’s power because furious and started to threaten them and curse. However, these men knew whom they served and they were not afraid to profess it. Their response was direct; it wasn't a case of being diplomatic . Call it a bold, daring  and outward demonstration of Faith in the Almighty God! Daniel 3: 16 Shadrach, Meshach, and Abed-Nego answered and said to the king, “O Nebuchadnezzar, we have no need to answer you in this matter. 17If that is the case, our God whom we serve is able to deliver us from the burning fiery furnace, and He will deliver us from your hand, O king. 18But if not, let it be known to you, O king, that we do not serve your gods, nor will we worship the gold image which you have set up.”

For me, this is one of the most challenging trials of faith one could ever encounter. This was death staring at their faces; death by being thrown into a lake of fire. If you have gotten your finger burnt in a candle or to say the least, tried to carry a very hot pot whilst cooking without a napkin, I am sure you definitely will have an idea of what a hot surface can do to you; the pain and discomfort that comes with it for the next few hours. But here we are , talking about a threat of being thrown into a furious, energized  blazing, threatening fire heated seven times stronger for that matter! Yet they stood their ground and refused to renounce their faith in God!

Have you ever wondered why God never came through for these men before they were thrown into the fire? One would have expected that an angel would have appeared to stop them from being thrown into it or at least quench the fire all the same. Have you ever imagined why a Christian, sometimes, some things happen to you and you wonder if God was asleep when such things were happening? It is apparent from this amazing story, that God wanted to show His omnipotent power and as we know, these stories were written for our examples that we might be followers of them who through faith and patience inherit the promises(Hebrews 6:12)…. Halleluyah!

Daniel 3: 24 Then King Nebuchadnezzar was astonished; and he rose in haste and spoke, saying to his counselors, “Did we not cast three men bound into the midst of the fire?”They answered and said to the king, “True, O king.”

25“Look!” he answered, “I see four men loose, walking in the midst of the fire; and they are not hurt, and the form of the fourth is like the Son of God.”

26Then Nebuchadnezzar went near the mouth of the burning fiery furnace and spoke, saying, “Shadrach, Meshach, and Abed-Nego, servants of the Most High God, come out, and come here.” Then Shadrach, Meshach, and Abed-Nego came from the midst of the fire. 27And the satraps, administrators, governors, and the king’s counselors gathered together, and they saw these men on whose bodies the fire had no power; the hair of their head was not singed nor were their garments affected, and the smell of fire was not on

Right in the midst of the fire, The Almighty came through for His own! He was in-there with them as the Fourth man! The King acknowledged the supremacy of this Most High God and commanded that nothing evil be said about Him. He commanded that only this God is to be served. He then promoted the three men! What was supposed to be their downfall led to their promotion! They were thrown in bound, but the king saw them moving around freely and untied in the midst of that fire! If that incident didn't happen, we probably would have heard about any people called Shadrach, Meshach and Abednego!

God is the Master of repeat performances. What He has done for one, He can do again and more gloriously. When He said in Isaiah 42: 2 that He will be with you when you pass through the fire and that the flame will not scorch you, he means every single word of it why? He has done it in time past and He is saying again to you today that- When you pass through the waters, I will be with you; And through the rivers, they shall not overflow you.When you walk through the fire, you shall not be burned, Nor shall the flame scorch you

Your challenge is capable of turning you into someone to be "wondered at" . What was meant for evil for you, will make you a superstar! Would you dare believe Him?