Do you ever have doubts?

Do you ever have doubts? 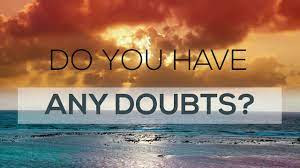 Listen to this podcast here:  https://www.pastorwoman.net/podcast/episode/2fb319e5/do-you-ever-ha...
We can know how God feels about our doubts, when we look at how Jesus handled this familiar situation. Jesus was not at all put off, scandalized or intimidated when someone questioned him, especially someone who came from a sincere place, a person who wanted to find him faithful … someone like Thomas.
Take a look:
“Now Thomas (called Didymus), one of the Twelve, was not with the disciples when Jesus came. So the other disciples told him, "We have seen the Lord!"
But he said to them, "Unless I see the nail marks in his hands and put my finger where the nails were, and put my hand into his side, I will not believe it."
A week later his disciples were in the house again, and Thomas was with them. Though the doors were locked, Jesus came and stood among them and said, "Peace be with you!" Then he said to Thomas, "Put your finger here; see my hands. Reach out your hand and put it into my side. Stop doubting and believe." John 20.24-29
Kinda' like Mary Magdalene, Thomas has always gotten ‘the rap,’ hasn’t he?  Doubting Thomas.  I don’t think he was deserving though … look back to John chapter 11, Thomas had been  prepared to follow Jesus to Bethany, even if it meant death.  ‘Can’t say he was noncommittal, now can you?   He wasn’t the guy who just went along with everyone else; he had to have his own experience, including seeing and touching the risen Lord for himself.
Notice how Jesus responded to Thomas—he did not denigrate him for his need to witness Jesus for himself.  “He said to Thomas, “Put your finger here, and look at my hands. Put your hand into the wound in my side. Don’t be faithless any longer. Believe!”
I love this exchange between Jesus and Thomas.  Jesus simply invites him to touch his side and look at his hands—experience him for himself—and then believe.  See, Jesus was absolutely confident that once Thomas knew it was him, he would believe, and believe with all his heart.
Truly, once he saw the marks of Jesus’ crucifixion, Thomas exclaimed, "My Lord and my God!"  Poor Thomas! He has the bad reputation, doesn't he? "Doubting Thomas" he has been dubbed down through the centuries.  But Friends, the rest of the disciples were doubters, too.  ‘Remember how they had run away? Remember how they had hidden themselves, until Mary “M” came to fetch them to come and see the empty tomb?
Well, the passage does not indicate whether or not Thomas actually did touch Jesus, but Jesus made the proffer.  And then he told him, "Because you have seen me, you have believed; blessed are those who have not seen and yet have believed."
That is you and me …  we have not seen Jesus in the flesh, that is true, but somehow we have encountered a life-changing Jesus Christ, Son of God.  We can see him with the eyes of our faith; we can speak of our experience with him—how he has changed our lives and brought meaning, peace, wisdom and purpose; we can see the fulfillment of prophecy, the accuracy of the biblical record--oh, yes, there is much to see. . . if we are only looking!
Jesus can handle our questions, especially those that are posed to remove doubts that impede our belief in him.  At least Thomas was courageous enough to step forward and verbalize his doubts; then, Jesus could meet him in his questions, and lead him into a most convinced faith.  That’s why I think we should call him ‘Believing Thomas’ rather than ‘Doubting Thomas’, what do you think?
Have any doubts? Step a little closer to the One who has nothing to hide . . . he will show you his scarred hands and feet, reveal himself from the pages of Scripture, stick closer than a brother to you* ... Jesus came to reveal himself, and one day he is coming again, coming as our King!
A beautiful throwback, The King is Coming: https://www.youtube.com/watch?v=LkVTncWTeLY
Our King is coming!
Christine
PastorWoman.com