The Gospel of John Chapter 21

“The Restoration of Peter” 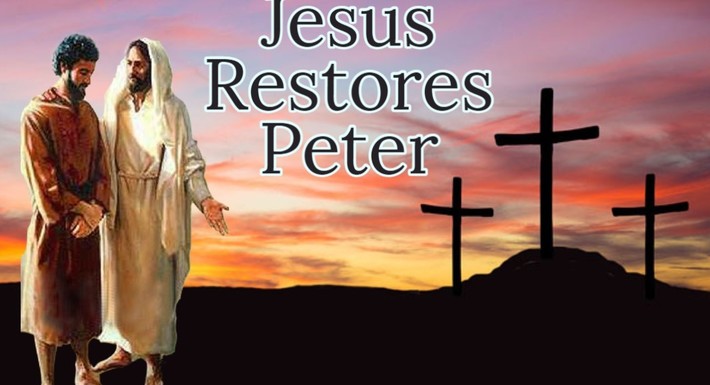 12 Jesus said to them, “Come and have breakfast.”

None of the disciples dared ask him, “Who are you?”

They knew it was the Lord.

13 Jesus came, took the bread and gave it to them, and did the same with the fish.

14 This was now the third time Jesus appeared to his disciples after he was raised from the dead.

15 When they had finished eating, Jesus said to Simon Peter, “Simon son of John, do you love me more than these?”

He answered, “Yes, Lord, you know that I love you.”

Peter was hurt because Jesus asked him the third time, “Do you love me?” He said, “Lord, you know all things; you know that I love you.”

CAN WE FORGIVE OURSELVES?

There are no verses in the Bible telling us that we need to forgive ourselves.

Sure, there is the second great commandment, “Love your neighbor as yourself,” which implies some self-love and self-care.

ISN’T IT TRUE THAT WE ALL STRUGGLE WITH SELF FORGIVENESS?

We’ve all had those moments when we’ve absolutely cringed over what we said or did, or didn’t say or didn’t do.

And yet something still lingers in our conscience, casting blame deep down inside, telling us we are worthless, that we no longer matter to God, that He really hasn’t forgiven us.

WE KNOW WE’RE FORGIVEN, BUT WE STILL PUNISH OURSELVES

So, how will we ever find freedom from this condemnation?

As we bask in God’s loving forgiveness, we will be able to let go of those regrets and persistent doubts, and finally accept ourselves again, as creatures who are flawed, but still precious in God’s sight.

In John chapter 21, we discover the second half of Peter’s story of betrayal and forgiveness.

Peter follows at a distance and finds himself at the outer courtyard of the Jewish high priest.

After all his bravado earlier, with comments like, “I’ll stay with you to the death!”

Peter found himself doing exactly what Jesus predicted he would do.

When asked if he knows this Jesus who is on trial, Peter takes the safe way out and denies knowing his Lord, not once, not twice, but three times.

And then the cock crows, and Peter catches Jesus’ glance from across the courtyard, and Peter remembers.

His failure must have overwhelmed him, as he contemplates how he just like Judas has betrayed his Lord.

We don’t see much of Peter in scripture for the next couple of days.

He is conspicuously absent at the cross, along with most of the other disciples.

Only the Apostle John and Mary the mother of Jesus and some other women stay by Jesus’ side.

On Sunday morning, that first Easter, Peter is back, along with John, racing to the tomb after Mary Magdalene announces it empty.

Jesus has appeared to the disciples, but not to Peter individually.

Now Jesus shows up as a stranger on the coastline throwing out some unsolicited advice to expert fishermen.

His guidance leads to an enormous catch.

John identifies the stranger as Jesus, at which point the always impulsive Peter dives in and swims to shore.

After breakfast Peter and Jesus has a 1-on-1 time with Peter where Jesus questions his devotion to Him and Peter answers in the affirmative.

Someone has described this interchange as both gut-wrenching, and soul-redeeming, a story of God’s graciousness, and Jesus’s loving forgiveness.

It is Jesus who sets the stage: three denials before, and now three questions of Peter’s love and devotion.

He has brought Peter right back to the setting of the betrayal, but this time with an important twist.

As Peter affirms his love, and then Jesus challenges him to serve.

The message to Peter is unmistakable!

“Not only do I forgive you,” Jesus says, “but I have important work for you to do.

Jesus is saying, “The time for pity parties is over.”

“Get off the bench and back in the game!”

Jesus restores Peter to his team, and then puts him back in the game again.

SO HOW CAN WE FORGIVE OURSELVES?

If we have done all this, then where do we think those messages of guilt and condemnation are coming from?

He promises to throw our sin into the deepest ocean, to remove it from us as far as the east is from the west, to choose to remember it no more!  (Psalm 103:12, Hebrews 9:26)

OUR CONDEMNATION IS NOT FROM GOD.

It comes from the evil one, who would love to see us wallow about helplessly in our guilt and shame, thus robbing us of joy and rendering our testimony worthless.

So, stop listening to the big lie!

Once we confess and repent of our sin, God says you are forgiven! (1John 1:9)

DOES THE CONSEQUENCES OF OUR SIN REMAIN AFTER WE’RE FORGIVEN?

The answer is yes.

Even though God forgives us, he doesn’t necessarily remove all the consequences.

If you have done criminal acts, you still will suffer the consequences.

As forgiven person, you can be guilty, but you are also blameless in God’s sight.

He forgave Adam and Eve, but still made them leave the garden, work hard, start aging, and have babies in pain.

Sometimes our sin might damage a relationship, or remove an opportunity, or ruin our health.

As for Peter, he had to live with his story recorded in scripture, most likely with his humble consent.

It must have been embarrassing for all to know how quickly he turned to self-preservation mode.

But his story is important because we can identify with him.

It gives us hope of recovery from guilt and shame, and a healthy shift to serving God by serving others.

He could have allowed himself to be so full of sorrow and remorse that he went out and committed suicide.

Even when he was full of shame, Peter kept coming back to Jesus.

And that’s what we need to do, when we’re overwhelmed with guilt and shame.

ALWAYS COME BACK TO JESUS

Even though he knew he didn’t deserve it, he came home to ask for a hired hand position.

But what did the father do in that story?

Why did the father do all this?

It was because that son was lost, but now he is found, he was dead, but now he’s alive.

This is how God receives a repentant sinner.

Jesus’ last words to Peter in today’s story are simply, “Follow me!”

And Peter did follow Jesus, all the way to an eventual death on the cross himself.

This Scripture points to that manner of death, when Jesus talks of Peter spreading out his arms when he is old. (John 21:18)

Peter followed Jesus to the end of this earthly life and into Heaven itself.

Heavenly Father, we are humbled by Peter’s story. We find ourselves in it, as we contemplate the failures in our own lives. Yet, you are a God who consistently uses flawed people to do your work, from angry Moses, to prideful Joseph, to scared Esther, to timid Gideon, to us today. Father, you used them all, despite their flaws. Use us, Lord. Forgive us as we bring our sin to you, and help us to know beyond a shadow of a doubt that we are forgiven, and called to serve out of our brokenness, relying on your Holy Spirit power, in Jesus’ name we pray, amen.