The Gospel of John Chapter 17 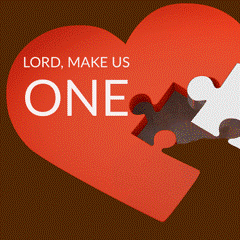 20 “I am praying not only for these disciples but also for all who will ever believe in me through their message.

21 I pray that they will all be one, just as you and I are one—as you are in me, Father, and I am in you. And may they be in us so that the world will believe you sent me.

22 “I have given them the glory you gave me, so they may be one as we are one.

23 I am in them and you are in me. May they experience such perfect unity that the world will know that you sent me and that you love them as much as you love me.

24 Father, I want these whom you have given me to be with me where I am. Then they can see all the glory you gave me because you loved me even before the world began!

25 “O righteous Father, the world doesn’t know you, but I do; and these disciples know you sent me.

John 17 is the prayer of Jesus prior to his death and is often called his High Priestly Prayer.

This was because he intercedes with God on behalf of the disciples, present and future.

John 17 prayer is also Jesus’ Last Will and Testament, because it represents his provision for the disciples’ needs on the eve of his death.

This prayer could be full of despair because the disciples have proven disappointing.

Even though Jesus has tried to prepare them for his coming death and resurrection, they have failed to understand.

They did not understand that Jesus kingdom was not of this world.

They thought Jesus was going to be the new king of Israel, like King David.

Furthermore, the disciples were ordinary men and there were not very many of them.

No CEO would entrust an important project to such an undistinguished group, but Jesus is leaving the future of God’s work in their hands.

The Holy Spirit will accompany them as their helper and will strengthen them and guide them.

Jesus prays, that they will all be one, just as He and the Father are one, so that the world will believe that the Father sent Jesus.

THE UNION OF THE DISCIPLES WITH FATHER, SON, AND SPIRIT MAKES THE IMPOSSIBLE POSSIBLE.

This tiny band of ordinary people will turn the world upside down.

THE LOVE OF JESUS FOR HIS DISCIPLES

The disciples are about to experience a great trauma as Jesus is crucified upon a Roman cross.

This prayer gives us a glimpse of Jesus heart for His disciples, as he prepares to leave them.

PRAY FOR THOSE WHO BELIEVE

Jesus prayed for the disciples, then he widens the circle to include those who will follow.

Jesus is optimistic in His prayer as He assumes that the witness of these disciples will be effective.

This prayer of Jesus is also for us today.

I believe that Jesus prays for both the individual and the corporate body.

This is a prayer for the unity of believers.

The enemy works to divide us.  Christ works to unite us.

Unity multiplies the effectiveness of our witness.

Advocates of the ecumenical movement cite these verses to justify their work.

However, their work is valid only as it adheres to true faith and practice, which isn’t always the case.

It is clear that Jesus’ prayer for the unity of believers has not yet been fully answered.

We desperately need to repent, and to hear Jesus’ prayer again and again.

However, we also need to recognize that Jesus’ prayer has been answered, at least in part.

We tend to forget how revolutionary Paul’s words to the Galatians were for the time, twenty centuries ago, when they were first written.

If we are sorry for the disunities that plague us, let us also be glad for the unity that blesses us.

In this Gospel, Christ’s glory is made fully manifest in his death, resurrection, and ascension (thought of as one continuous action in this Gospel).

It is through the cross and open tomb that Jesus returns to the glory that he enjoyed with the Father before the creation of the world (John17:5).

The glory which the Father gives the Son results ultimately in the exaltation of Jesus, who is given “the Name which is above every name, that at the Name of Jesus every knee should bow, of those in heaven, those on earth, and those under the earth” (Philippians 2:9-10).

The pathway to that exaltation involves the Son emptying himself, “taking the form of a servant, being made in the likeness of men.

And being found in human form, he humbled himself, becoming obedient to death, yes, the death of the cross” (Philippians 2:7-8).

The love with which the father loves the Son leads ultimately to a throne, but only by way of a cross.

UNITY IS POSSIBLE ONLY BY THE GRACE OF GOD.

The disciples argued over who was greatest (Mark 9:34).

James and John requested, “Grant to us that we may sit, one at your right hand, and one at your left hand, in your glory” (Mark 10:37).

The early church experienced doctrinal controversy and other conflict (Acts 15).

But the grace of God will also enable them to work together to proclaim the Gospel of Jesus Christ.

It was their spiritual unity that made the proclamation of the Gospel highly successful.

Dear Father, we give thanks to You for all You have done for us. Thank you for this glimpse into the prayer life of Jesus. We desire to have communion with you also. Jesus stressed the importance of unity among your people. Make us one in our days so we can be affective witnesses to the lost. Everyday help us to come and build up our relationship with you so we will have your heart for one another. In Jesus name we pray, amen!