"In Our Father’s House" 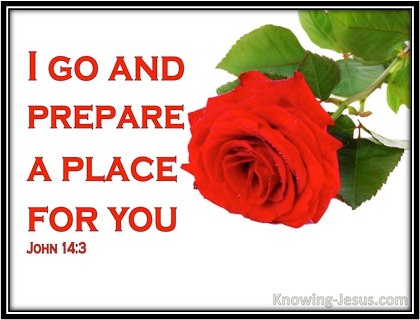 1 “Don’t let your hearts be troubled. Trust in God, and trust also in me.

2 There is more than enough room in my Father’s home. If this were not so, would I have told you that I am going to prepare a place for you?

3 When everything is ready, I will come and get you, so that you will always be with me where I am.

4 And you know the way to where I am going.”

6 Jesus told him, “I am the way, the truth, and the life. No one can come to the Father except through me.

1 - WE ARE NOT OVERWHELMED BY OUR TROUBLES BECAUSE WE BELIEVE IN GOD.

How did you do with that this past year?”

In our Scripture today Jesus gives us a reason not to allow our hearts to be troubled.

We are not overwhelmed by our troubles because we believe in God.

In 1 Thessalonians 4, Paul writes, “we are not a people without hope.”

We could be grieved by what we see happening in the world.

We could be disappointed by the changes we see happening in our country.

But these things do not overwhelm us because we believe in an all-powerful, all-knowing, ever-present God who is in charge of all things.

He controls the course of world events; He removes kings and sets up other kings.
He gives wisdom to the wise and knowledge to the scholars.

We are not like unbelievers who have no hope.

We believe in a God who raises up leaders and tears down others.

Nothing is beyond His strength and power!

“Who knows if perhaps you were made queen for just such a time as this?”

God knew everything that was going on with the plot to destroy His people.

He placed Esther where He wanted her to be, because He was going to use her to save the Jews.

Every person in all history has been placed in the time they were in because of God’s sovereign plan.

He also knows that your child can handle whatever challenge they face in their life.

He created them specifically for it!

Don’t be scared for your children, but be honored that God chose you to parent the generation that is facing the huge challenges.

God isn’t scratching His head wondering what He’s going to do about this mess of a world.

He has an army He’s raising up to drive back the darkness and make Himself known all over the earth.

Don’t let your fear steal the greatness God has placed on them.

2 - WE ARE NOT OVERWHELMED BY OUR TROUBLES BECAUSE WE BELIEVE IN JESUS.

In response to their concerns Jesus tells His disciples, “Trust in God, and trust also in me.”

The disciples had been with Jesus for more than 3 years by this time.

Now Jesus tells them, you have seen my power.

You have seen my compassion.

You have seen my timing and my love.

Now he is asking them to trust in Him.

He is saying to them;

If He expected them to believe in Him, how much more should He expect us to do the same.

We are this side of the resurrection.

They thought the world was about to end, but we, we know He was crucified, but we also know He was raised!

I must admit that I have spent way too much time fretting over what is going on in the world and especially in our country.

I grieve over what I see taking place, but my friends, nations rise and nations fall, and as Solomon reminds us in Ecclesiastes, it’s all vanity, it’s all futility.

We serve and vote as citizens, but this is all temporary.

The Bible tells us that one day there will be a new heaven and a new earth.

That everything we are building and working on and worrying about right now, will one day pass away.

Jesus is preparing a place for us. There is a place prepared for us called Heaven.

Jesus says He is going to prepare a place.

Heaven is not a state of mind.

It is not some cosmic spiritual condition.

It is a real place!

And notice, He says there are many rooms, or many dwelling places, or many mansions, depending on the translation you are reading.

But also notice, He is preparing each of those places for us individually.

But each of those rooms would be individually prepared with the person in mind you were preparing it for, taking his or her likes into consideration.

Jesus says, I my Father’s house are many rooms, many mansions, and I am going to prepare one for you.

Jesus says, I know you’re coming, I’m getting your room ready for you.

Dear Father, thank you for this new day. We have come to understand that our trust is in the triune God, Father, Son and Holy Spirit. Jesus came to show us that You are trustworthy. You always keep your promises and supply us with all we need to live lives that are pleasing to you. Thank you, Holy Spirit for teaching us and helping us to be everything God desires for us to be. In Jesus name, amen!