Christianity is not the white man's religion 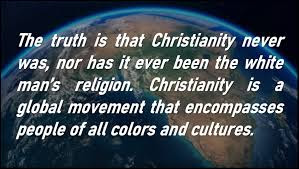 Listen to this podcast here:  https://www.pastorwoman.net/podcast/episode/4435fd9e/christianity-i...
So many incendiary comments bandied about on social media, so many shots taken across the bow . . . virtue signaling left and right, until no one is untouched. And it is not enough for someone to say he does not believe in Christ, he has to tear Christianity down, he has to make it bad--he has to make it racist, bad for people of color. Either he is ignorant or he is a liar--both are without excuse.
Enter today's Scripture.
Luke's coverage of what happened 50 days after the Resurrection, 10 days after Jesus' ascension into Heaven is incredible.
On the day of Pentecost all the believers were meeting together in one place. Suddenly, there was a sound from heaven like the roaring of a mighty windstorm, and it filled the house where they were sitting. Then, what looked like flames or tongues of fire appeared and settled on each of them. And everyone present was filled with the Holy Spirit and began speaking in other languages,as the Holy Spirit gave them this ability.
At that time there were devout Jews from every nation living in Jerusalem. When they heard the loud noise, everyone came running, and they were bewildered to hear their own languages being spoken by the believers.
They were completely amazed. “How can this be?” they exclaimed. “These people are all from Galilee, and yet we hear them speaking in our own native languages! Here we are—Parthians, Medes, Elamites, people from Mesopotamia, Judea, Cappadocia, Pontus, the province of Asia, Phrygia, Pamphylia, Egypt, and the areas of Libya around Cyrene, visitors from Rome (both Jews and converts to Judaism), Cretans, and Arabs. And we all hear these people speaking in our own languages about the wonderful things God has done!” They stood there amazed and perplexed. “What can this mean?” they asked each other.
But others in the crowd ridiculed them, saying, “They’re just drunk, that’s all!”
Acts 2.1-13, NLT
Welcome, Holy Spirit, and thank you, Lord, for keeping your promise of sending the Holy Spirit to inhabit the people of God! It is an amazing picture that Luke paints of this historic event, describing the sound of a mighty wind and what looked like tongues of fire resting on each individual's head. (While bizarre, you can picture it in your mind)
The Holy Spirit came on the Day of Pentecost, (meaning ‘fifty’ ­­so, 50 days after Passover), and would forever change the world. Pentecost was one of three annual Jewish festivals and is also called the "Feast of Weeks" because it was seven weeks after Passover. Pentecost required Jews to travel to Jerusalem with gifts and offerings to present to God. The timing here is remarkable because the feast is what brought Jews from "the ends of the earth" together in Jerusalem, to be present at the same time.
Here's what I want you to take note of today -- those people who Luke listed as hearing 'the great works of God' in their own native tongues -- not a one of them was a white westerner. Looking up each people group that was mentioned, there were Greeks, Turks, Iranians, Kuwaitis, Africans (Libyans and Egyptians), Iraqis and Syrians, Afghanis and Pakistanis . . . all who were hearing in their own languages the works of God meant for them--for their families and their people.
As the people started speaking in other languages, 'xenoglossia' or speaking in an unlearned language, a crowd of Jewish pilgrims, (remember­­­­--­having traveled from near and far to observe Pentecost), formed outside as they heard their native tongues spoken. It was God's way of drawing them to Himself, as they heard the people telling the great things God had done, and they heard it in their own languages! Somehow they knew that the speakers were Galileans, though they were shocked by the clarity with which their languages and dialects were uttered. (Galileans were looked at as less refined, backward, and even peculiar because of their dialect) Yet, these were the messengers of God's goodness to all of the travelers who would hear and take the goodness of God back to the towns from which they came. Incredible.
We will consider more closely the miraculous events that morning, but for now, what are we to take from this magnanimous view of that momentous day?
->God keeps his promises--He said he would send the Spirit and he did.
->His timing is perfect. While you and I may grow tired of waiting for an answer or to see a change. . . our perspective is totally different than an infinite, all-­knowing, all­-powerful, holy God.
->As the Holy Spirit came to each believer that day--so He comes to each believer today.
->The message those believers spoke out was for ALL PEOPLE; there was no consideration of race or color.
Do not miss out on this joyous song--included in podcast or click this link:
"One Big Family" - unique, to be sure. https://www.youtube.com/watch?v=Wom79R2cwhk
Oh, this is so exciting!
Christine
PastorWoman.com